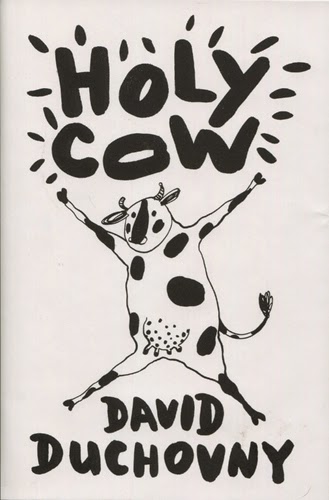 This first novel by actor David Duchovny is, as would be expected, outside of the box. It is a fable, narrated by Elsie Q., a milk cow on a small farm in upstate New York.
As the tale begins, Elsie discovers the brutal truth about what happens to cows on farms, possibly her farm too, and worse, what likely happened to her mother, who had simply disappeared one day.  She also learns that in India, her kind is worshiped, and live out their lives in comfort and safety. So obviously, she must go to India. What could be better than being worshiped as a holy being? Accompanying her on this excursion is Jerry (Shalom) the pig, who believes going to Israel will save his life, and Tom the turkey who has determined the country named after him would obviously not be serving turkey as food. This bizarre trio manage to secure passports and tickets and board a plane to the Middle East.
Okay, so suspension of disbelief is obviously indispensable here, but that’s really not the point. This book is hysterically funny, and also satirically wise. On the surface Holy Cow presents a sort of “follow your dream” message; but not far beneath it is a condemnation of human animals for their cruelty and abuse of two- as well as four-footed creatures, and a plea for resolution to the conflicts exploding in the Middle East:
“The Israelis built this giant wall to keep Palestinian Arabs out of the disputed lands they were claiming for themselves. It reminded me of the fences back on the farm that were meant to keep us animals in our place. There is something in man that loves a wall, but what wall menders and fence builders do not get is that when they fence something out, they are also fencing themselves in.”
All of that is wrapped up in a healthy dose of silliness that does not diminish the seriousness of Duchovny's message. The primitive drawings complement the romping tale perfectly.
The first half of the book is written in the style of a screenplay because Elsie is pushing for movie rights to her book. She points out product placement and contemporary cultural references that her editor tells her will broaden her audience. It’s clear Duchovny had loads of fun poking at the publishing and entertainment industries while spinning his yarn. It is also clear that Elsie is one helluva cow, holy or not.
For more cow books, see Ask the Cow, by Rita Reynolds, and My Gentle Barn, by Ellie Laks.
Posted by Books for Animal Lovers at 5:13 AM