A Brazilian Odyssey: review of BLOOD-DRENCHED BEARD, by Daniel Galera 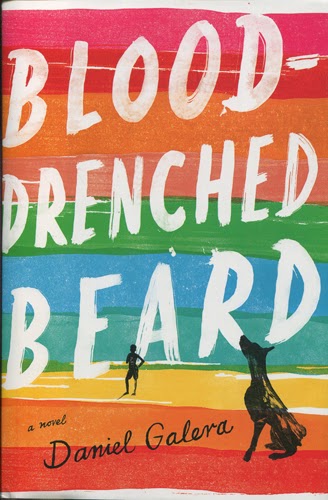 In some ways a murder mystery, in others an exploration of immortality, and further, the story of a man and a dog, this novel by the gifted young Brazilian writer is above all richly evocative.
The hero, unnamed, but referred to at times as Swimmer, Tom Hanks, and Gauderio (after his grandfather, to whom he bears an exact likeness) goes on an odyssey with his father’s dog, in search of the truth of his grandfather’s death. He’s a triathlete and expert swimmer, who finds solace and restoration in the ocean, but also terror.
The novel begins with his father’s declaration of imminent suicide, and his dying wish that his little dog Beta be euthanized after his death. He doesn’t want her to suffer his absence. He also tells his son about the murder of his own father apparently at the hands of the villagers of Garopaba, a quiet and beautiful beach town on the Atlantic coast of Brazil. The group murder is reminiscent of Agatha Christie, and strikes our hero as possibly fictional, and totally irresistible.
His father makes good on his suicide decision, but his son refuses to have Beta put down, instead taking the elderly dog with him on his search for the truth about his grandfather.
Due to a rare condition of facial amnesia, he is unable to remember people’s features, which leads to awkward moments at best, and violent reactions at worst. He finds that the quiet little beach town is anything but, and that residents’ claim of peaceful existence actually hides a dark history. As he asks questions about his grandfather, he’s met first with startled silence, then suggestions that he not delve any deeper, and eventually with threats. And as summer retreats, the ocean grows colder and grayer.
The novel is written in a rhythm not unlike the waves that crash just outside the narrator’s door. The ocean is a Greek chorus to the narrator’s journey. There are long stretches of calm rumination that change to sudden explosions. Beta becomes a dolphin-like swimmer, gaining strength and life after an accident had nearly crippled her. At that time, the ocean offers salvation. But when the dog is in jeopardy, the storm-churned waters become rabid, and murderous.
Although this isn’t a dog book, per se, the character of Beta is as important as any of the people, and in some ways, more so. Beta’s is one face the narrator seems to actually recognize, and his devotion to her is what leads to the title of the book: an unforgettable moment of explicit violence and dark humor.
Posted by Books for Animal Lovers at 7:46 AM