Love, Loss and Family: review of THE GOOD LUCK CAT, by Lissa Warren 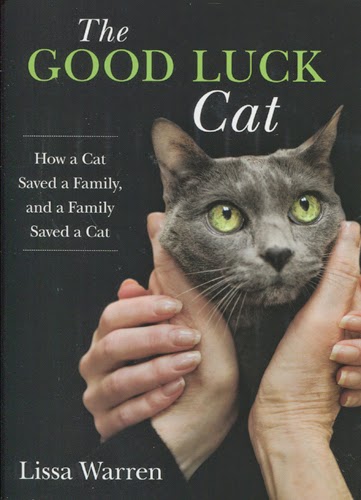 A cat’s devotion is hard won but unbreakable, as anyone who has ever loved a cat will attest. True, they demonstrate their loyalty differently from dogs, but it is loyalty all the same. Each of the ten felines I have shared my home with over the last fifty years has had his or her own way of fitting into my life, as if each were the missing puzzle piece I’d been searching for.
The good luck cat of the title of this lovely and heartfelt memoir is Ting-Pei, a Korat, which in Thai means “good luck.” She is brought into the Warren household by Lissa and her mom to give Lissa’s retired dad a companion, one who would entertain him while the women were away at work. Ting turned out to be the perfect fit, and Lissa’s father adored the little cat. In fact, all three became Ting’s ardent admirers, protectors, and defenders. Ting could do no wrong, even when she did.
But good luck didn’t hold out quite as long as hoped. Lissa’s father became ill with heart disease, and eventually succumbed, leaving three grieving souls behind: his daughter, his wife, and his cat.
When Ting herself developed a heart condition at age fourteen, Lissa and her mother were determined at all costs to heal her. It was as if losing Ting would have been akin to losing her father all over again. Surgery ensues, and then the endless battle to protect stitches from a cat’s relentless tongue. Mother and daughter even buy onesies for babies and try to wrap Ting up to protect the incision:
“As for me, I’m not unaware that I’ve become a thirty-six-year-old single woman who lives with her mom and dresses her cat in baby clothes. But I don’t care. I’ve shimmied far enough up Maslow’s hierarchy that it doesn’t much matter what others think about me. All I want is for Ting to be well…..”
As Ting improves and moves happily into older age, Lissa finds herself undergoing tests and fighting down fears as she feels something amiss in her own body. Illness is bearing down on her, but it will not quash her optimism, which seems to be the gift of her late father, and one she cherishes and honors.
Warren writes with unapologetic zest about cats in general and her cat in particular. Her family is atypical in many ways, and she’s quite aware of that. But the intensity of their devotion to each other is enviable and really, these days, maybe extraordinary.
The good luck Ting has brought to the Warrens may not always seem evident, but it is there, part of the little grey ball of fur, seeking out the swath of sunlight on the carpet, and purring as if life depended on it. And maybe it does.
Posted by Books for Animal Lovers at 4:35 AM