In Extremis: review of ARTHUR 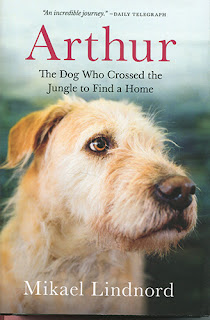 ARTHUR
The Dog Who Crossed the Jungle to Find a Home
Hardcover, $24.95
Mikael Lindnord

Adventure Racing is the kind of sport that most of us mere mortals find inexplicable. Why would anyone want to run, bike, paddle, ski, hike, etc., for several days or weeks, through unmapped terrain, risking one’s health and life, like some sort of weird global masochistic exercise? As Mikael Lindnord writes, “I think suffering is a skill I have.” And he shares that skill with a surprising number of other athletes who choose to torture themselves in these competitions.

During the Ecuador Championship, Mikael and his team found themselves facing a different challenge. After five grueling days, the team rested at a transition stop, preparing for what the organizers had warned would be the most difficult stretch: a trek through nearly impenetrable jungle, full of “biting creatures,” and muddy bog holes that would slow the racers to a crawl, and then finally a rigorous stretch of kayaking to the finish line. As they settled uncomfortably at the transition area, hoping for a couple of hours of sleep, Mikael decided they all needed an extra dose of protein and carbohydrates. He warmed up two packs of meatballs with pasta, what he considered a “five-star dinner in the world of adventure racing.” The meal provided needed calories to help them face the torture to come.

Amidst the chaos of the transition area, however, Mikael spotted a dirty, yellow dog who quietly watched him. He was filthy and had a wound on his back, and yet was calm and thoughtful, staring into Mikael’s eyes from across the room. Having no experience with dogs, or any desire to approach a disease-ridden stray, Mikael nevertheless was drawn to this creature. He spooned out a couple of precious meatballs and walked over to the dog, placing the food before him. The dog wolfed it down in an instant.

Mikael returned to his resting teammates, and began preparing them mentally and physically for the test to come. He thought no more about the dog, except to hope he would be OK. He knew the fate of strays in this part of the world, and he wondered how this quiet, pensive fellow would survive.
Later that night, as the team struggled through the first stretch of snake-invested bog, they were surprised to find a new member joining them: the yellow dog had followed them into the thickest, muddiest, most dangerous part of the jungle, and would not leave Mikael’s side. His perseverance became an inspiration to the team. They could not abandon him, even if he gave them a chance to, which of course, he did not.

The race continued, with Mikael’s team dropping further behind, but their mission had changed from coming in at the top third to helping their newest, four-legged teammate. By the time they crossed the finish line, the dog had a name, Arthur, after the legendary king, and a growing presence on social media. He and his team were greeted by cameras and fans, much to the dismay of the winning team. The publicity turned Arthur into an overnight celebrity. But even such a celebrity status couldn’t guarantee a safe passage out of the country to Mikael’s home in Sweden. Bureaucrats and swindlers smelling potential money to be made threw obstacles in the path of Arthur’s emigration, as if this previously undesirable, neglected, and abused soul was now somehow of vital national importance. Mikael, true to his nature, did not give up. Nor did Arthur. It took a great deal of finagling and money to finally get Arthur to Sweden where, unfortunately, he then faced quarantine. Still, he was safe, and is now living happily with his family.

Arthur is now the namesake of a foundation set up to help other Arthurs in the world by promoting immediate rescue and adoption, and long-term changes, such as laws making it criminal to mistreat animals. To donate and read more about this foundation, go to www.arthurfoundation.org. And to watch a video about Mikael and Arthur, go to http://arworldseries.com/arthur-a-distance-of-6455-miles-doesnt-begin-to-measure-the-journey-one-dog-made/

He is only one dog, but Arthur has proven what it means to survive and not ever give up. He is the elite athlete of this story, and deserves every possible accolade.
Posted by Books for Animal Lovers at 1:48 PM