New Review: THE RIGHT SIDE by Spencer Quinn 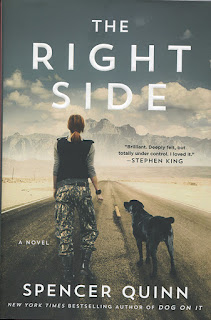 Spencer Quinn is the beloved author of the Chet and Bernie mystery series, starring a brilliant, if at times distracted, white-eared dog, who relays the confusing and annoying antics of the humans around him with openness and unintentional humor. Quinn’s gift for mind-melding with a dog in a way that is both believable and entertaining is not restricted just to animals, but to people as well, as this new novel proves.

The long, apparently never-ending struggle our troops are fighting in Afghanistan has created many heroes, and many broken minds and bodies. The Right Side presents us with a hero, in every sense of the word, and her struggle to fight the derailing of her mind after being nearly blown up during an operation in Afghanistan.

LeAnne Hogan awakes in Walter Reed Hospital with a blinding pain in her head and a blackness on her right side. Her right eye is gone, and there is shrapnel in her brain, but that last bit of info continually eludes her. The loss of her eye, however, is ever present and unforgettable. She had been an accomplished athlete (pole vaulting), before joining the military, where her strength, intelligence, and courage were leading her on a trajectory of success. Her personal life was blossoming with her new love. Life was complicated and intense, but LeAnne thrived. But now she looked upon her ruined face and diminishing strength with bitterness and despair. Here Quinn’s ability to become his protagonist, whether a dog or a woman, is startling and brilliant, but only as an afterthought. Reading, we become entangled in LeAnne’s shattered thoughts and are passengers on her journey, embedded like a civilians in a war zone.

LeAnne’s roommate at Walter Reed is a recalcitrant amputee named Marci. Their friendship is hardly warm and fuzzy, but becomes fiercely intense. With their battle-scarred minds, they manage to make each other laugh, and tiptoe into the depths of despair the injuries and traumas have sent them. Marci tells LeAnne of her first marriage to a kind-hearted man she should have stayed with, and her second to an abusive mistake, with whom she had a daughter. The eight-year-old Mia was living in Washington state with Marci’s mom. What will become of her daughter if something happens to her? she asks LeAnne. Something already has, LeAnne answers. They both laugh.

LeAnne clings to Marci, needing her friendship like a salve for her ravaged face. So when Marci unexpectedly dies, LeAnne’s weak grip on sanity loosens even more. She sneaks out of the hospital and begins a cross-country trip to Washington in search of Marci’s past life and her child, or maybe in search of her own past. Her memory is short-circuited, and her days drift by in mostly drunken oblivion.

It’s not until about three-quarters into the novel that the dog appears. She’s a stray, large and dark-eyed, mysterious and not particularly friendly, but she attaches herself to LeAnne and will not let go. LeAnne tries to find a home for her, but the dog, whom she eventually names Goody, will not release her hold. Strangely, Goody seems to know to walk on LeAnne’s right side to help guide and protect her. When LeAnne finds out that Marci’s daughter has gone missing, Goody becomes all the more important in the search for the little girl.

LeAnne finds herself on a mission. She becomes obsessed with finding the little girl and with belatedly rectifying Marci's messy life, and perhaps figuring out her own future.

Our concepts of right and wrong blend at times, with ethical and moral choices becoming less clear, especially in war: thus the ambiguous title of this fine novel. But as LeAnne finds her path, Goody knows which side to walk on.

Posted by Books for Animal Lovers at 7:38 AM