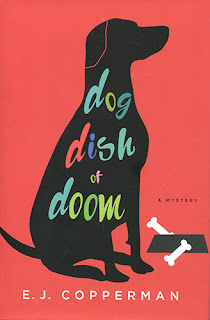 Kay Powell is the owner of Agent to the Paws, a one-woman entertainment firm in New Jersey representing animals and, by default, their people. Kay's newest client, Bruno, is truly exceptional. Bruno is an unusual looking dog, "a hairy ottoman," highly intelligent, and a natural actor. His audition for the part of Sandy in a revival of Annie goes swimmingly, and a contract is offered by a world-renown director. But the director tells Kay that part of the contract includes keeping Bruno's humans away from the theatre during rehearsals and performances.

Kay is surprised by the animosity between the director and Bruno's "parents," Trent and Louise, but also agrees that both are more than a little annoying. She is ambitious, however, and a bit hungry for clients, so she does her best to move the relationship forward and get Bruno into the part. Trent, however, is livid, and berates the director, vowing never to allow Bruno to be part of the production.

The tension is strange, Kay agrees, but she is determined to find a way. Until Trent is found dead, a knife in his back, and his head face down in Bruno's water bowl. Then things get just a little bit dicey...

This is a fun, fast read, full of red herrings, and with a suitably surprising outcome. There's also a bit of romantic tension that obviously will be continue to build as the series gains momentum. These days, a bit of comic relief is, well, a relief, so don't pass up an opportunity to smile. Any fans of David Rosenfelt, Spencer Quinn, or even Janet Evanovitch will get a kick out of this new series.

Posted by Books for Animal Lovers at 6:16 AM