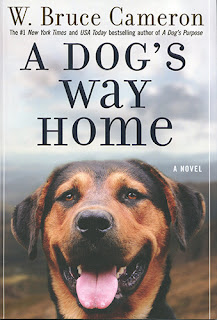 In the footsteps of the classic stories of a dog finding his way back home, W. Bruce Cameron (author of A Dog’s Purpose, The Dog Master, and others) treads confidently, using the dog’s perspective and voice to carry us along. He also addresses the controversial dangerous dog laws that have resulted in far too many gentle dogs being put to death because of their resemblance to so-called dangerous breeds, most notably pit bulls. Likewise, he manages to insert gay marriage, care of mentally ill veterans, heroin addiction, and use of therapy dogs into this canine adventure tale.
If the human characters come off at times a bit two dimensional, such a perceived flaw can be easily erased by the depth of understanding for Bella, the heroine and narrator. Using first person (first canine?) as a device has pitfalls for most authors, but Cameron is quite a pro, given his spectacular achievement with A Dog’s Purpose. Of course, he’s not alone. Sewell, Terhune, and Cameron’s contemporary, Spencer Quinn, all produced stories with momentum and emotion while staying true to what we believe would be an animal’s thought processes.
Thus, in A DOG’S WAY HOME, when Bella hears certain words she recognizes, she responds as we’d expect. But of course, it would make it a boring book if she didn’t veer away at some point from the expected. And this tale is anything but boring.
The story begins when Lucas Ray, a young man living with his mother and struggling to find a purpose in life, discovers a puppy among a family of feral cats in an abandoned building. Lucas has been feeding the cats, and fighting the developers who were threatening to destroy the building and any unfortunate animals hiding there. The puppy’s own canine family had scattered, and she found solace with the mother cat and the kittens.
Lucas rescues the puppy, Bella, bringing her home to their apartment where pets are not allowed, in a city (Denver) where pit bulls are not allowed. (Whether or not Bella is actually a pit bull is never completely decided, but she apparently resembles one, and that’s good enough for the authorities.) Lucas teaches his puppy to do No Barks, and Go Home on command in case the dog catcher spots them out and about. It’s the Go Home command that is particularly important. Since he is afraid to leave her alone during the day, he takes her with him to the VA hospital where he works, and discovers that she is a wonderful comfort to the patients there suffering from emotional and mental disorders brought on by military service.
It is clear early on that Lucas and his puppy are doomed to be separated. As trouble heats up, Bella is sent to live in a foster home 400 miles away while Lucas and his mom, scramble to find a more friendly place to live and work.
Bella is distraught and confused, and when she hears anything about “home,” she is determined to do what Lucas taught her to do: Go Home. Her long, arduous journey back to Lucas is at times heart-breaking, frustrating, frightening, and occasionally funny. W. Bruce Cameron’s wit and obvious love of all things doggie shine brilliantly here. Bella’s story is compelling, and will make a fabulous summer read for dog lovers.

Posted by Books for Animal Lovers at 5:56 AM