A Fierce and Gentle Heroine: review of THE ZOOKEEPER'S WIFE: A War Story 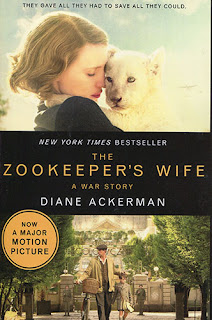 The Zookeeper's Wife: A War Story

I first read an essay by Diane Ackerman in The New Yorker in 1988 titled simply “Bats.” Her humor, empathy, research, and unique turn of phrase led me to find other works by her, all of which I’ve read with relish. Her work never disappoints, bringing a warmth and style that just cannot be imitated or duplicated. She has a scientist’s eye for detail and a poet’s ear for phrasing. Her descriptions of the German invasion of Poland in The Zookeeper’s Wife, are poignant and memorable, bringing the crumbling buildings and hollow-eyed inhabitants to vivid life. Each animal, each person, has his or her own story to be told, and their narratives are displayed in full color. The movie based on this book will, I hope, bring an even larger audience to Ackerman’s works.

Ackerman relied on Antonina Zabinski’s own writings as well as diaries and interviews of survivors of the Warsaw Ghetto, to tell the story of the Warsaw Zoo and its role as a haven for “Guests” who were escaping Nazi brutality. She addresses the important and controversial issue of the Nazi’s fascination with eugenics and their somewhat bizarre determination to preserve “pure” species of some animals. As in Elizabeth Letts’ The Perfect Horse, we witness both the horrific brutality of the regime and their strange protection of (at least some) animals.

Antonina and Jan Zabinski were ardent animal lovers, whose care for the most exotic as well as the more mundane of their creatures made the destruction of the zoo that much more heartbreaking. But rather than give up or escape with their young son, they chose to stay and risk their lives to save as many Jews as they could, hiding some in the empty cages, where secret passageways connected to the villa so that food could be smuggled in to them, and playing elaborate schemes to keep the Germans off track. Each Guest was given a new name, sometimes harking back to the zoo’s original purpose; thus an artist who particularly loved birds was renamed Starling. Sometimes the names were just intentionally Christian. The change of names was just one more dent in the Jewish identities, but was a necessary and at times life-saving practice. The animals, too, were all named. A hamster named Piotr (Peter), for instance, became the close companion to one guest, Maurycy Fraenkel, called Pawel (Paul). Such friendships brought some levity into a dark time:

“After supper each evening Maurycy turned Piotr loose on the table’s polished mesa, where the hamster skittered from plate to plate, whisking up crumbs until his fat cheeks dragged. Then Maurycy would gather him up in one hand and carry him back to his cage. .  .  . the pair became inseparable, and villa-mates began referring to Pawel and Piotr collectively as ‘the Hamsters.’”

Jan Zabinksi left each day to a job that provided adequate cover for him to extract more people from the Ghetto and to distribute food to the starving. Each day Antonina cared for the hiding Guests, her young son, and the few animals they managed to save. “[She] was a housewife,” Jan is quoted as saying. “[S]he wasn’t involved in politics or war and was timid, and yet despite that she played a major role in saving others and never once complained about the danger.” It was her intense understanding of animals, he believed, that gave her the strength to stand up to mortal danger. “[F]rom time to time she seemed to shed her own human traits and become a panther or a hyena. Then, able to adopt their fighting instinct, she arose as a fearless defender of her kind.”

In the course of the war, Antonina became pregnant and was bedridden, and yet still managed to protect those in her care. When her baby was born, her fierce protectiveness was all the more in evidence. She was gentle, soft-spoken, always questioning herself, and yet she never faltered, no matter how terrified, when standing up to the enemy.

The ever-present vigilance required to stay alive was exhausting. Most of those that did survive, did not live to a ripe old age. Four years of war scraped twenty years or more off their life spans. Consequently, we are seeing now the last of the witnesses leave us, and soon will have to rely on accounts such as this one to remember the mass psychosis of the Nazi era. Without knowing the history as intimately as possible, we will always face the possibility of another insane ideology taking root.

This account of true and honest heroism is uplifting and inspiring, but also a grim reminder of how the world can turn tipsy below our feet under the right—or wrong— circumstances. Can we afford to cater to leaders who are ignorant or dismissive of this history? Antonina Zabinski would most certainly shudder at the thought.

Posted by Books for Animal Lovers at 12:03 PM