Tara's Legacy: a reveiw of LESSONS FROM TARA 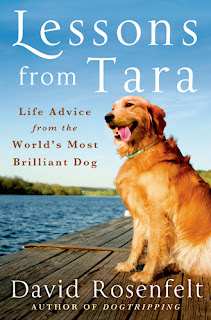 Lessons from Tara: Life Advice from the World’s Most Brilliant Dog
David Rosenfelt
Readers of Mr. Rosenfelt’s books already know his devotion to dogs, especially to Tara, the inspiration behind his work with his wife, Debbie Myers, rescuing dogs, and the namesake of their foundation. Without Tara, Rosenfelt tells us, they would likely never have become the nutty dog people they are now; Dogtripping, his book recounting their trip across country with three RVs full of rescued dogs, would certainly never have been written or experienced; and he’d likely be getting a full night’s sleep every night instead of being buried in a pig pile of dogs on his bed.
And of course, life would not have been nearly as rich and rewarding. So, as another tribute to Tara, Rosenfelt has written this lovely, funny, poignant collection of lessons learned, not just from Tara, but from many of the souls they have rescued over the years. The credit for all of the lives saved he gives to Tara:
“The lessons in this book are the ones I learned from Tara and her friends. She never met any of them, but she saved every one of their lives.
“And I am forever grateful.”
The lessons are simple, seemingly transparent, but carry with them a deep understanding of what it means to love. David and Debbie have given their home and their hearts to all sorts of dogs, but primarily to seniors, who have only a few months or years left. Rosenfelt’s mission is to allow these forgotten canines to spend their final days in a home with human compassion and loads of canine companionship, rather than to slowly waste away in a shelter. Obviously, this means constant and expensive vet visits and knowledge that the next one may be the last. Possibly one of the most important lessons Tara taught David was how to cry, because doing what they do, he must accept the sorrow of saying goodbye again and again and again.
Dog lovers will relish the wit and wisdom in these pages, while perhaps being thankful to share a bed with only one or two creatures:
“…[T]here are always at least four dogs on the bed, though it can get as high as six. The regulars are Wanda, the mastiff; Jenny, a lab mix; Cheyenne, a Great Pyrenees; and Boomer, Cheyenne’s sister. And these are not small dogs; they represent a little more than four hundred pounds of dog….”
I for one will never complain again about being stuck in a fetal position all night when Katrina is sleeping horizontally across the bottom of our bed, while Sophie and Nellie the cat are occupying the middle, and sharing part of my pillow. The thought of tossing a Great Pyrenees and a mastiff into the mix is unfathomable. Kudos to Debbie and David! And thanks to another wonderful book, the legacy of Tara lives on.
Posted by Books for Animal Lovers at 9:46 AM