Talking Animals: Review of ALEX & ME 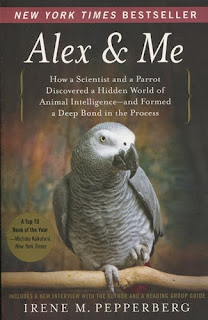 In Chaser we learned about a border collie who has mastered the names of over 1000 toys, and who also shows an understanding of syntax and semantics, as well as definitions. Chaser is able, in a sense, to communicate with her human. But it is a one-way communication, because of course, Chaser cannot speak. That is, she cannot speak our language.

Alex, an African Grey parrot, on the other hand, could participate in dialogue with his humans. He could also add and understand concepts of equivalency, and even came to understand zero up to a point. In many cases, he taught himself words and ideas; for example, calling an apple a “banerry,” possibly combining banana and cherry.

In Irene Pepperberg’s fascinating memoir about her work and life with Alex (Alex & Me), she is determined to discover if a parrot can do more than just parrot. Is there more than mimicry involved when the bird speaks? The answer is a resounding yes, of course, as Alex demonstrates repeatedly. He not only uses language for his demands (“Want nut!”) but to emote (“I’m sorry!” “Calm down!” and “I love you”). And as he demonstrates, a creature with a brain the size of a shelled walnut can develop and learn at about a five-year-old human’s level.

But Alex may have been an exceptionally bright parrot— a bird brainiac. His parrot colleagues who joined him in some of the testing and training were noticeably insecure around their brilliant labmate. Alex often interjected his own criticisms during their training sessions, telling one bird to “say better,” when he felt he was mumbling his answers.

Alex also had an advanced sense of humor, and obviously enjoyed messing with his humans. When he was bored or simply out of sorts, he made it clear he wanted no part of the curriculum and would simply turn his back on his trainers. When he was feeling particularly puckish, he’d purposely misspeak, or would insist his humans obey his many commands. The students who worked with him called themselves “Alex’s Slaves.”

There are many questions surrounding the study of animal communication and cognition. Are we barking up the right tree? Should we be studying how animals speak, rather than teaching them to learn our language?

And we are also still fighting against the Great Chain of Being concept, perpetuated by the belief that man is God’s creation and inherently superior to all other life forms. So long as we believe humans are the center of the universe, animals will take a back seat, and studies of animal intelligence will also be met with some resistance. The thirty-year-long relationship Dr. Pepperberg had with Alex ended too soon, but spanned a change in the scientific community towards acceptance of language and communication in animals.

Alex’s accomplishments are truly breathtaking. Dr. Pepperberg’s memoir was published in 2008, but it is timeless in presenting seemingly irrefutable evidence not just of avian intelligence but emotion as well. Her plea, and much of her work, has been devoted to protecting pet parrots from the devastating effects of isolation and boredom resulting from ignorant and incompetent owners. A child placed in a closet during his formative years would be considered abused, and rightly so. A bird placed in the same circumstances is also abused. It’s best for them to be left in the wild, but since there are so many sold as pets these days, at least they should be given every opportunity to thrive intellectually.

Thanks to the so-called Clever Hans case, there are still critics of Dr. Pepperberg’s work, as well as the work of other scientists studying animal intelligence. It’s an uncomfortable concept for some folks to accept that the animal they are eating, caging, capturing, or manipulating may be as intelligent as their pre-schooler. Books such as Alex & Me point out in no uncertain terms that there is much to be learned and discovered about our fellow creatures. Ignorance and egoism seem to be uniquely human traits; intelligence, however, is not.
Posted by Books for Animal Lovers at 8:15 AM