Uphill Climb: review of THE MOUNTAINTOP SCHOOL FOR DOGS (a novel) 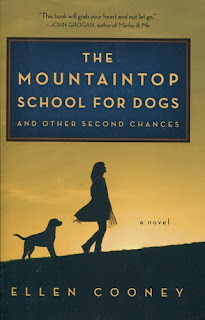 This is a story about hope. Not the trite, Hallmark-style of hope, but the sense of pushing up from loss or failure or trauma with eyes forward and tail held high. Although the subtitle mentions second chances, the characters here—human and non—are actually dealing with third or fourth chances.
The novel concerns Evie, a young woman wearing L. L. Bean clothe, and carrying a load of psychic baggage. Although she knows nothing about dogs, she applies for the position of dog trainer at the Sanctuary—the school for rescued and often unadoptable dogs—and is accepted. She’s an avid reader and eccentric student, memorizing the dog books she carries in her backpack, and organizing her own thoughts alphabetically. She soon discovers, however, that the dog books are useless when dealing with the reality of rescued dogs, and unceremoniously burns them all.
She arrives mid-winter at the inn at the base of the mountain, where Mrs. Auberchon, the innkeeper and also the Warden of the Sanctuary, greets her with open disdain. She distrusts this girl who seems to be the product of East Coast elitists, and questions the sanity of the Sanctuary staff for taking her on. But then she watches Evie work magic on a dog suffering from compulsive pacing. Something in this young woman is able to connect with these damaged creatures.
Evie finds herself dealing with a pack of neurotic animals and humans who all seem to have reasons to forget their pasts, but who, like her, find it tough to move forward.  The pacing dog was one; the greyhound who refused to run—or even move—was another. She is given a “class” of students whose quirks and issues she chronicles, working to find the trick that will free them from the prisons of their difficult pasts. And in so doing, she finds her own salvation, or at least a glimpse of it.
Under her category of Learning, she writes: “A new male, a greyhound called Alfie, feels that coming to class means curling up in a corner and being still. When I explained that this wasn’t allowed, he bristled and showed me his teeth. I don’t have notes on him yet, but I know he was a racer. He thought he had the right to never move again. Also, he was not interested in learning this thing called housebreaking. Did I know where he used to live? He used to live in a stable. I hated it there, he was telling me, but that’s who I am.”
The author calls this a “novel with dogs,” but the dogs are not simply accessories. Their stories are as vital and riveting as their human counterparts’ are, and completely believable. The prose is exquisite: at times hilarious, and other times poignant. Like so many of the orphans in the story, this book is a keeper.
This title is now available in paperback. 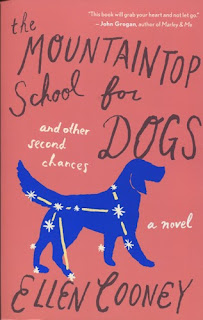 Posted by Books for Animal Lovers at 6:12 AM