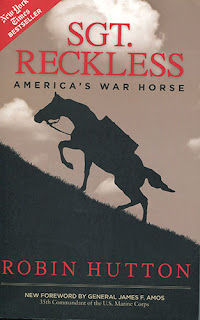 Unlike Sergeant Stubby from World War I, or Simon, the only feline recipient of the Dickin Medal for bravery in World War II, or Chips, the German Shepherd who captured four prisoners in World War II—all of whom were given honorary titles and medals—Reckless was actually promoted to sergeant, and she had the stripes on her blanket to prove it.

Originally a small mare of racing stock in Korea, Flame, as she was then known, was bought by U.S. Marine Lt. Eric Pedersen for the Marine division to carry the cumbersome loads of Recoilless (or Reckless, as they were nicknamed) rifles and ammunition. Her heartbroken Korean owner needed the money to buy a prosthetic leg for his sister, who lost hers to a landmine.

Flame—renamed Reckless—had no previous experience with explosions, and needed to be trained to “take cover when there was artillery fire.” She trembled and perspired with fear the first few times she heard mortar attacks, but eventually she became bombproofed—literally—to the action around her. Upon command to take cover, Reckless would kneel down, then when the mortar was fired, she’d sprint to her bunker. As her “hoof camp” trainer explained: “All I had to yell was ‘Incoming! Incoming!’ and she’d go.” He eventually was able to just use hand signals.

But Reckless’s true worth to the Marines came at a pivotal battle, when, amidst a rain of incoming fire and deafening explosions, she repeatedly hauled the heavy Recoilless rifles and ammunition up steep inclines to her fellow soldiers during the so-called “Battle of the Nevada Cities,” saving many lives, and helping to secure the outpost. Reckless earned two Purple Hearts due to injuries she sustained during that battle. But what is particularly amazing is that she traversed the route over and over again by herself.  In a single day, she made fifty-one round trips to various gun sites, most of the time traveling solo. She knew her mission, and she was determined to fulfill it. The Marines depended on her, and she never disappointed them. As Marine demolitionist Harold Wadley recounts:

“The roar and crack of the 90 mm tank rounds . . . was numbing. . . . I looked through the flickering light at the hillside beyond and could hardly believe my eyes. In all that intense fire, in the middle of that chaos, the image of that small, struggling horse—putting everything she had into it, struggling up that ridge loaded with 75 mm rounds . . . —was unbelievable.”

Reckless was also a companion to her “herd,” her fellow Marines. She had the run of the camp, and was welcome inside tents, especially during cold weather, to join in conversation, snacks, and to sleep by a warm stove. She developed a taste—possibly an addiction—to Coca Cola, sweets, and alcohol, especially beer, which her friends gleefully shared. Amazingly, the unhealthy diet didn’t adversely affect her.

Anyone who has read Wendy Williams’s amazing book The Horse knows the insight and intelligence horses possess, and might not be as surprised as Reckless’s fellow Marines were at her cleverness and her intuition. Fortunately, the men appreciated her, loved her, and were determined that she not be left behind, as so many previous war animals have been. Reckless was moved to Camp Pendleton, and, thanks to the author of this biography, her memory continues to be honored. A beautiful bronze sculpture, depicting her carrying her load, was unveiled last fall in Camp Pendleton. Reckless was buried with full military honors at Camp Pendleton, along with her offspring.

Too often the sacrifices made by our military and the animals who accompany them are overlooked or under appreciated. Political savvy, tough talk, or an enormous bank account can deflect attention away from the true heroes among us. This book reminds us to honor and respect those who have given their lives, health, comfort and well-being for the safety of others, and to regard warily those who have chosen to accept the benefits without paying the costs.

Posted by Books for Animal Lovers at 7:25 AM