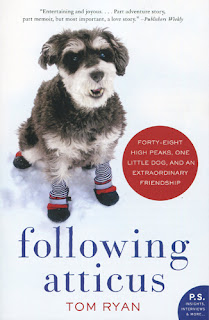 Although the book has been out for a few years, I felt compelled to write a few words about it given the recent (May) passing of its hero, the miniature schnauzer Atticus M. Finch.

Tom Ryan started his own newspaperpaper in the overly quaint town of Newburyport, MA, stepping on toes as he exposed hypocrisies and petty politics. He also gained a strong and loyal following and was gradually accepted into the community.

When he found Atticus online, through a breeder in the south, he knew the puppy was meant to be with him. The two developed a bond that was unbreakable except, of course, for the ultimate separation. And both man and dog found their mutual passion in hiking the forty-eight high peaks of New Hampshire. The mountains became their spiritual sustenance in the midst of some daunting physical challenges faced by both man and dog. Lyme disease, cataracts, injury, and terrors did not sway these two intrepid adventurers from continuing on their journeys.

Fundraising was the original motivation for Tom when he sought the challenge of hiking the 48 peaks during the winter, twice. They’d already done them once, so why not? The goal was unreasonable, crazy, dangerous, but both man and dog were up to the task. Except when they weren’t…. There were times when Atticus simply looked out the car window then curled up in his seat. Those were the days when Tom turned around and went home. He never forced his companion to go if the little dog wasn’t up to it.

Other times, Tom forced himself to face his fears of the dark, and of heights: two tough obstacles to overcome when hiking:

“Then in the woods to our left, a boomlike crash sounded in the shadows of the tight trees and startled me. I turned to see if it was the witch, all the while knowing it was!
In turning, I lost my footing, and suddenly I was airborne. . . . When the trail made an abrupt turn to the left, I didn’t and instead went sailing through the air, landing in deep, soft snow. Back, head, shoulders, knees, legs, arms. I was in one piece. I lay like that for a while, thinking of the absurdity of being in the woods in the mountains in a pile of powder, gazing up at the bottoms of evergreen trees.

Atticus caught up, climbed onto my chest, and stood there looking down at me.
In that ludicrous position, with a little dog on my chest, I decided that the time had come to put away the fears of my childhood. It was ridiculous.”

FOLLOWING ATTICUS is a deeply personal, intimate book by a man who was known around town for being a social loner—not at all a contradiction. He could chat with anyone, and as a newspaperman, he was always listening and watching. But he was happiest alone, gazing out over the expanse of New Hampshire from a summit. Alone, that is, except for his constant companion, Atticus M. Finch. May Atticus rest in peace.
Posted by Books for Animal Lovers at 9:23 AM