Bookish Cats: review of THE TRUE TAILS OF BAKER AND TAYLOR 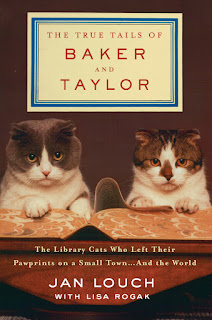 Baker & Taylor may be the name of a distribution company, but it’s also the name of two very special cats who captured the hearts of a library, a quickly growing community, and the nation. Jan Louch, a librarian in Carson Valley, Nevada, adopted the cats for the library, thinking they would provide both companionship and mousing. But after the mice disappeared upon the cats’ arrival, their main job became brightening the days of anyone who cared to cross their path and scratch their ears.

The memoir begins when Jan becomes an Assistant Librarian at the Douglas County Public Library after a difficult divorce and moving her family to her parents’ ranch. A lifelong bookworm and animal lover, she couldn’t imagine anything better than combining her two favorite things. Hence, the idea for library cats was born. After making sure the board would approve two literary felines, Jan and her boss, Yvonne, set about finding the perfect pair.

Baker came first. A pure-bred Scottish Fold formerly named “McLean’s Clint Eastwood,” Baker quickly took to the library and its patrons, soaking up all the attention he could muster. He was welcomed warmly by the small community, and the patrons were delighted to be greeted by a gray cat with folded ears who would sit quietly as they buried their hands in his fur and shared their stories with him, both joyous and sad.

Soon after, Baker’s nephew Taylor arrived courtesy of the Baker and Taylor distribution company. He, too, had the classic Scottish-Fold ears and gray coloring, but he had his own unique personality and quirks. Instead of Baker’s mellow charm and bizarre obsession with cantaloupe, Taylor was more reserved and was predisposed to yogurt. Taylor also brought much laughter to the library with his less-than-graceful “sitting-Buddha” pose.

This charming memoir traces the lives of both Jan and the cats as both the library patronage and the Carson Valley population grew exponentially. As their primary caretaker, Jan also served as their ambassador to the general public, who were quite smitten with the two cats. Soon, though, this responsibility grew into an almost full-time job once the cats became a national sensation after the Baker & Taylor distribution company photographed the cats for a promotional poster. After bribing and begging with the cats during an extended photoshoot, one of the most popular library posters was created.

To get a grasp of just how popular these two (blissfully ignorant) library cats were, between 1990 and 1992, 750,000 shopping bags, 250,000 posters, and 200,000 calendars were given away to librarians who still clamored for more. With this popularity, it was inevitable that fan clubs would emerge, the most active being the Baker and Taylor Fan Club in Ohio that had nine years’ worth of second graders writing letters to Baker and Taylor and receiving missives from the felines themselves (channeled through Jan).

Caring for the cats and dealing with the popularity they brought wasn’t always easy, and Jan describes times when she had to scrape together money with Yvonne in order to pay for their vet bills. And times were quickly changing for librarians, between the advent of computers and new education requirements. But despite the challenges she faced in both her personal and professional life, Jan makes one thing clear throughout the book: she never wavered in her commitment to Baker and Taylor.

The book is interspersed with entertaining interviews of other library cats (from the cats’ perspectives), lyrics from a song penned by the children of the Baker and Taylor Fan Club, and even a note from Carole Nelson Douglas, a prolific author who featured Baker and Taylor in one of her novels. Where the book really shines is in highlighting the particular ways Baker and Taylor changed library patrons’ lives. One particular instance stands out: Mr. Figini, an autistic man who asked about the cats every day and who could often be seen reading a magazine with his hand resting on Baker’s back. After all, as Jan points out, “the cats were the great equalizers.”

This memoir translates what was a national phenomenon into a personal narrative about the two cats who changed one librarian’s life. As many animal lovers know, they usually end up giving us more than we can ever give them. As Jan says,

“Baker and Taylor were great teachers, and in the end, I am grateful to my feline officemates for teaching me several vital life lessons. The first thing they taught me is to be true to yourself. If it’s in your nature to sleep twenty hours a day, go for it, as it was for Baker, then go for it and don’t let anything get in your way…. Next, be the best at what you do. If that happens to be sleeping, then take those paws, put them over your face, and just concentrate…. Lastly, never lose sight of your primary purpose in life. I’m not sure if Baker and Taylor had conscious goals, other than Baker’s ceaseless quest to find the warmest place in the library and Taylor’s desire to personally lick clean every cup of yogurt that crossed his path, but the fact that I never saw them waver in their determination helped me immeasurably in my own life.”

THE TRUE TAILS OF BAKER AND TAYLOR is filled with such life lessons imparted by two unwitting but incredibly lovable felines, who also happened to be among the most famous cats in the country. Their likenesses live on as Baker and Taylor’s ever-popular mascots, but if you want the real story of two cats who changed a librarian’s life and the community around her, don’t miss this great read.

Posted by Books for Animal Lovers at 9:19 AM