A Novel of Hollywood's Old West: FALLING FROM HORSES 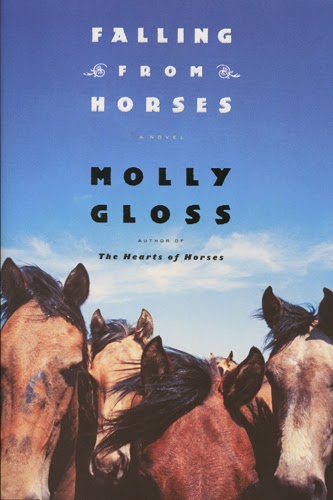 In Falling from Horses, Bud Frazer, a young cowboy, leaves his home in Oregon to travel to Hollywood, escaping his parents’ loss of their ranch, Echol Creek, and the death of his little sister. The year is 1938, and Los Angeles is already sprawled across the basin, choking with traffic and people.
On the seemingly endless bus ride from Oregon, Bud becomes friends with a young woman who has her sights set on becoming a writer for movies. Lily Shaw is outspoken, though diminutive in size, and fiercely ambitious. The fact that women in Hollywood are not much known for anything other than acting or secretarial work or worse, does not dissuade her. She and Bud form an unusual bond, based on their shared love of movies, that proves to be a lifeline in the coming months and years.
Like Lily, Bud wants to break into movie making, in his case, as a stunt rider in westerns. His determination overrides his growing disillusionment. Hollywood, he learns, is brutal—to horses, to men, to women.  But he is just nineteen when he arrives and he works on his strut and swagger, even as he struggles to find a place to sleep and enough money to eat. When he does get his big break, his very soul seems to be swallowed up by the need to push the limits.
The falseness of the movies clashes with the harsh reality of life behind the scenes. Hollywood is the land of broken dreams and in Bud’s case, broken spirits. “The stars over Echol ranch were always at their brightest in December, the cold winter nights bringing them out crystal clear, but here a brown haze—nobody called it smog in those days—had been hanging over the Hollywood Hills and the whole Los Angeles valley for the past few weeks, and I couldn’t see a damn thing above me except the blurred disk of the moon.”
Bud narrates the novel, and his voice will stay with you long after it is finished. He is a thoughtful, self-educated man, with an artist’s soul and a bronco rider’s ego. His simmering anger over the death of his sister and his increasing need for proving himself on ever more dangerous “gags” leads to further wrecks and desolation.  He recognizes the looming danger, but it’s hard to give up the dream, and as he looks back from the perspective of a middle-aged man, he wonders how he could have held onto that dream for so long. The smell of fear, stale booze, and horse sweat seem to hang over Hollywood like the blanket of smog over LA.
Molly Gloss is a formidable writer. Her previous books, The Hearts of Horses, and The Jump-off Creek, cemented her reputation as a novelist. Falling from Horses will certainly become her next bestseller, and deservedly so.
Posted by Books for Animal Lovers at 6:08 PM