A Memoir of Awakening: a review of THE DOGS WERE RESCUED (AND SO WAS I) 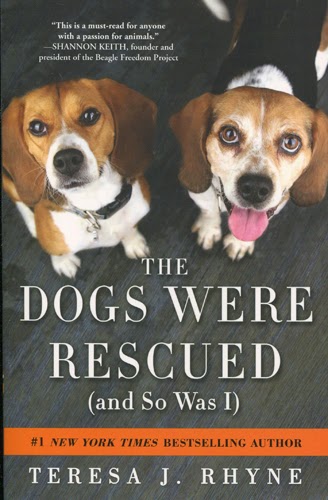 Ignorance really can be blissful.
For people who care about animals, not knowing about laboratory testing or how their meat or milk is produced is easier than knowing and doing nothing. I for one can’t claim ignorance. As a child, I knew all about beagles in labs. My father was active with The Fund for Animals at the time and I helped pass out brochures that displayed photos of beagles hooked to cigarette machines that forced them to smoke the equivalent of several packs a day. I would be speechless with anger and sorrow as I read the descriptions, but I was just a kid and didn’t know what to do with that anger. These days, thanks to the Internet, I’ve been able to easily swap out household products with cruelty-free substitutes. But still, the experiments and superfluous testing goes on. It’s a matter of money, as most things are, and that’s a fight that may never be won.
As a teenager, I read The Ordeal of the Animals, and learned about the horrors of slaughterhouses and the advent of factory farms. Again I felt fury, but I believed that nothing I did would make a difference.
Recently, in my efforts to offer books that delve deeper into issues of animal welfare, I’ve again felt that gut-gnawing anger. The images stick in my mind and keep me awake; the utter stupidity and greed that drive people and governments (and the military) to such rampant annihilation of wildlife, maltreatment of domestic animals, and destruction of natural resources are unbearable at times. But in reading these books and sharing them with others, I feel I am helping in some small way to educate and enlighten, and eventually maybe put a dent in the machine of injustice.
When I picked up THE DOGS WERE RESCUED (And So Was I), the second memoir by Teresa Rhynes, author of THE DOG LIVED (And So Did I), I thought perhaps it would be a nice break from some of the heartbreaking books I had just finished. Instead, Rhynes writes of discovering the true nature of meat and dairy production in this country, and then about the cruel use of animals—especially beagles—in laboratories for testing of products. She confesses ignorance to all of these atrocities, and then once she knows, she can’t turn off the images. They rob her of sleep and peace of mind, and she becomes somewhat (by her own admission) unhinged. Her plant-based diet was originally chosen to combat the possible return of cancer, but then as her immersion in animal rights films and books continues, she can no longer tolerate eating an animal who has been tortured and slaughtered.
But changing her diet and tossing out household items that do not have the leaping bunny logo does not bring her consolation. She becomes almost frantic with guilt, remorse, and finally the fierce evangelism of the newly enlightened. Gradually, with a lot of help from her beagle family and her human companion, she reaches a place of peace.
Ryhnes quotes Mother Teresa: “We can do no great things, only small things—and with love.” Ultimately, we are not going to completely shut down factory farming or laboratory testing on animals, but by using our powers as intelligent, educated consumers, we can make a difference, even if it’s relatively a drop in the bucket. Every animal saved from torture is a victory. And for Teresa Rhynes, ever beagle rescued is cause for celebration.
One of the best parts of this compelling memoir is the list of what’s in her cupboards—a great selection of resources, books, films, etc., to help animal lovers make ethical choices in their lives.
For more information about rescuing beagles from labs, visit the Beagle Freedom Project (www.beaglefreedomproject.org)
Posted by Books for Animal Lovers at 6:22 PM