Treats and Cheats: review of HEART OF BARKNESS, Spencer Quinn 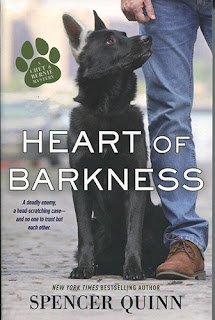 A Chet and Bernie Mystery

Spencer Quinn is a talented writer of fiction. His more serious, THE RIGHT SIDE, about a veteran dealing with brain injury and a dog who instinctively covers for her. His Chet & Bernie mystery series is lighter fare, of course, being narrated by Chet the dog, a hundred-pounder with ears that don't match. But Chet being Chet, we are painted a picture of the human condition as only a dog could see it: without understanding, and yet with curiosity and wonder.


It’s been a long three years since our last Chet and Bernie fix. I don’t know about you, but I’ve been waiting impatiently for Chet the Jet to catapult himself again into our lives and into Bernie’s open arms. Whoa, big boy!

In this latest romp, Chet and Bernie go to hear their favorite old-time country music singer, Lotty Pilgrim. But in a tangle of stolen tips, refused song requests, and chases that show Chet at his very best, the duo find themselves in the middle of a strange and mystifying case.

The song Lotty wrote but wouldn’t perform proved to be a ballad about a murder that happened long ago. The perpetrators are determined to keep that case cold and will stop at nothing to hide the secret.
Spencer Quinn, the alter ego of Peter Abrahams, began writing the Chet & Bernie series, he says, after his wife suggested it. Chet is not a talking dog. His role as the narrator (unreliable narrator) allows plot twists and turns and switchbacks that keep the reader on edge. But his truly doggy instincts and nature are never forsaken. And that makes for laugh out loud narrative.

Since Quinn seems to have tremendous fun with this series, we have reason to hope that he’ll continue (although more novels along the lines of THE RIGHT SIDE would be equally welcomed). With a new publisher, the series will have a new look. But Chet and Bernie will still drive through the Arizona desert—Chet riding shotgun—hunting perps and sniffing out bad dudes—Chet doing the sniffing—for many more dog years to come.

Posted by Books for Animal Lovers at 7:46 AM