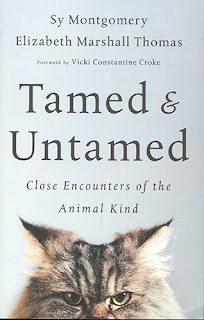 Each piece in this brilliant collection is short, sweet, and to the point. Some are funny, some poignant, but each offers some fine bit of history or factoid that may make you sit up and say, "Wow, really?" And each conveys the sad truth that humans, being the controlling animal, have made a mess of things.

Sy Montgomery and Elizabeth Marshall Thomas are both New York Times bestselling authors of books about animals and nature, and in Thomas's case, novels about pre-history, as well as a memoir of her time living in Africa. Although their subject matter is similar, their styles are distinct and yet complementary. Both focus on the beauty and brilliance of some of the most misunderstood (or under-understood) creatures in our midst. And they adhere to an ethical sense of duty to species as well as to individuals. Whether discussing water bears, chickens, or lions, they treat their subjects with respect, wonder, and reverence.

Take sharks, for example. Montgomery writes of accompanying a Massachusetts biologist in his study of the return of great white sharks to Cape Cod. Despite movies, books, and poor press, great whites, she learns, are anything but menacing. They're not interested in eating people, or even interacting with them. They like seal meat and they go where the seals go. The biologist called them "laid back," "calm," "beautiful," and Montgomery agreed when she finally got to see one up close off the coast of Mexico. "No wonder, then, that when the great white approached me in the shark cage, instead of fear, a great sense of calm swept over me. With him in charge, the ocean would be in good hands." Of course, that's the problem: we are in charge, not him.

In Thomas's book The Hidden Life of Deer, she attracted criticism for her practice of feeding the deer who visit her Peterborough, NH, homestead. Here she writes more about the controversial practice of feeding deer, why it can be harmful (even deadly), and how she manages to time her feedings just right so as not to interfere with their winter digestion, or attract deer to hunters. But overall her argument is simple, clear and so terribly logical:


Which brings us to the question of why help wildlife anyway? I do it because we're so happy to damage them. We destroy their ecosystems to build houses, we hunt them just for pleasure, and we kill them with our cars when they try to cross the roads. If during a harsh winter I can help a little in a responsible manner, whereby the same deer who came in the fall are there in the spring to hide their fawns in the grass on my field, I feel I've done some good.

This collection isn't just intended to finger point and blame humans for harm to nature and animals. We don't really need any more books to tell us what we've done; thoughtful humans understand this already. Rather, Montgomery and Thomas give us glimpses into their lifelong studies of animals in the hopes that by sharing their discoveries, we may be inspired look a bit deeper at our own world, and not be quite so quick to condemn or dismiss the creatures around us. There is more in the animal world that joins us than separates us, and that is the message of this wonderful book.


Posted by Books for Animal Lovers at 8:10 AM