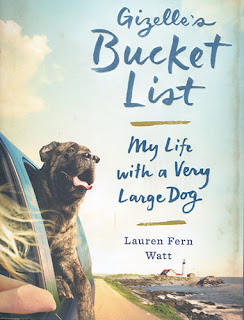 Gizelle’s Bucket List: My Life with a Very Large Dog

OK, get out the tissues. Memoirs of loving and losing a special companion are tear-inducing, of course, and Lauren Fern Watt’s tale of her English Mastiff’s rich but short life is right up there with Marley & Me in that regard. But there is a lot of laughter, too, and a great deal of empathy for this young woman’s foray into adulthood, with all of its awful pitfalls. She was fortunate to have an enormous companion by her side during those dicey days sliding from teens to twenties, and from school to the workplace.

As a puppy, Gizelle (named after Princess Giselle in Enchanted) was obviously bound for greatness, with paws the size of baseball gloves, but just how large she grew was still awe inspiring. And like the Great Dane in The Ugly Dachshund, Gizelle seemed oblivious to her giant size:

She was our resident bulldozer, spilling coffee and knocking over frames with her tail. And if my sister and I were snuggled on the small two-person love seat in the living room watching a movie, Gizelle was blind to the fact there wasn’t space for her, too. She would always make room for herself, stealthily placing one paw up and then another paw, then a graceful launch of 160-something pounds of her and finally a dainty landing into our laps. . . . She wore a smile, her mouth open as she panted, as if she thought: They do not even know I am here.

Lauren Watt was brought up in a suburb of Nashville, in a family that was constantly sidelined by her mother’s addiction to drugs and alcohol. Growing up with an addict kept Lauren on edge, never sure what to expect. But it was her mother’s love of dogs combined with her impulsive nature, even when sober, that resulted in Lauren finding Gizelle. With two dogs already in the household, Lauren chose to lie to her father about the sudden appearance of a robust puppy. She told him the puppy was a lab mix and just a foster, not a permanent addition. “Is it me, or is she growing kind of fast?” he asked, but accepted his daughter’s word. Of course, he discovers the truth, but by then he had witnessed the bond between his daughter and the rapidly growing pup, and after a mild scolding, agreed to help take care of Gizelle while Lauren was in college.

Taking care of Lauren’s mother, however, proved too much for everyone. Rehab never seemed to hold for long. Briefly, the mother she loved would return and life would seem perfect. But before long, the addiction took hold. And returning home from college, Lauren again found her mother undone. It seemed to be a last straw for her. She packed up Gizelle and left Nashville, determined to find her way someplace grittier, livelier, and more cosmopolitan, and away from the constant tension of home. She moved to Manhattan.

Just as Giselle, the princess in Enchanted, pranced through Central Park, so it seems fitting that her canine doppelganger should also romp through the City. But Gizelle the 180-pound muscle-bound creature, who startled pedestrians and drew repeatedly ridiculous comments (that’s a T-rex, not a dog!) was frightened of the city noises, and cowered every time she heard a horn or saw even something as innocuous as a balloon on the sidewalk. And the only apartment Lauren was able to find that could house a super-size dog and not cost a small fortune was right smack in Times Square. Thus, she nicknamed their new home Times Scare, and struggled to find her own footing while reassuring her intimidated dog that nothing would hurt her. (Managing the bathroom habits of a giant dog in a city was equally challenging and particularly humorous.) Gradually, both Lauren and Gizelle learned to love the City. New friends are made, good jobs are found. So long as Lauren ignores her slowly dissolving home in Tennessee, she can keep moving forward, a mastiff by her side. When Gizelle begins to limp, Lauren can no longer hold panic at bay.

You know the fairy tale has to end, but it is heartening to read of the author’s personal growth as she devotes her life to making Gizelle’s diminishing days as good as they can be, writing the bucket list of things she feels Gizelle would enjoy: trips to New Hampshire and Maine to jump in leaves, walk in sand, eat ice cream, and watch the snow fall on the beach. Gizelle seems to love all of the activities Lauren plans, but most of all, Gizelle simply loves being with her human companion. It’s through Gizelle that Lauren herself learns about forgiveness and empathy.

So yes, keep the tissue box handy, but as the items in Gizelle’s bucket list are ticked off, you will find yourself inspired and humbled by Lauren’s devotion and Gizelle’s courage. We all generally outlive our animal companions. If they manage to teach us something before they go, that is cause for celebration, not sorrow.
Posted by Books for Animal Lovers at 1:04 PM