Murder and Puppies: review of THE TWELVE DOGS OF CHRISTMAS, an Andy Carpenter Mystery 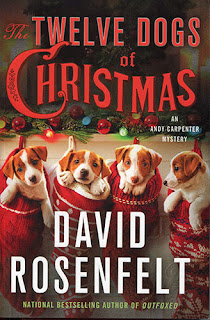 THE TWELVE DOGS OF CHRISTMAS
An Andy Carpenter Mystery

David Rosenfelt is beloved of animal enthusiasts for his work in rescue, as recounted in his wonderfully funny memoir, DOGTRIPPING, and the sequel, LESSONS FROM TARA. He is also a skilled writer of mysteries, in which dogs are not exactly front and center, but still an important element. (For front and center dogs, you can’t beat Spencer Quinn’s Chet & Bernie series.)

Rosenfelt’s alter-ego, Andy Carpenter, is a lawyer who has inherited the means to avoid lawyering as much as he likes, but in this new mystery, he feels compelled to take on the defense of a local eccentric who rescues puppies. Her nickname is Pups, and she is cantankerous to the max, but Andy knows a good heart when he sees one, and he understands Pups’ cynical and wary view of humanity. After all, she rescues adorable puppies who would otherwise be euthanized because of lazy, heartless, or just plain stupid people.

But Pups is in serious trouble. After Andy defends her against a neighbor’s sudden complaint and the town’s cease and desist notice, said neighbor is found dead by Pups. And worse, the weapon is found in Pups’ basement. And even more troubling, Pups herself had publicly threatened the neighbor, promising to do some physiologically impossible harm to his body.

First on Andy’s to-do list is to make sure the twelve puppies in her care find homes fast, and that Pups’ own dog is cared for as well. Being Christmastime, he is confident all puppies will be in demand.

And then Andy  dives into Pups’ defense. The case becomes rapidly more complicated when she is further implicated in other murders. Andy scrambles to find out who is behind the killings and why they are framing Pups. The investigation takes him across country from New Jersey to South Dakota, as he pieces together the puzzle. But he is also being followed, and is in more danger than he imagined.

The humor and dog-friendly characters who fill the pages of this latest mystery make it a perfect gift for a dog lover. But it’s appealing to any mystery reader who would like an escape from the daily newsfeed of despair.