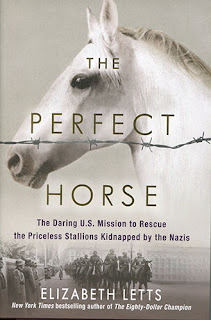 The Daring U.S. Mission to Rescue the

Priceless Stallions Kidnapped by the Nazis

To the Third Reich, perfection meant being in line with Germany’s ultimate global rule. The perfect horse, therefore, had to be a warhorse of supreme physical strength, compliant temperament, and low maintenance. Gustav Rau, Olympic organizer and chief horse breeder of the Third Reich, was fascinated by the study of eugenics, and determined to apply those principles to the “enhancement” of the horse. To his twisted way of thinking, inbreeding to accentuate certain traits would lead to the perfect horse. Arabians were considered to be pure blooded, and were eyed by Rau for his breeding studies.

Rau took over an Arabian stud farm in Poland after the director and the staff had tried, unsuccessfully, to flee the double onslaught of German and Russians. When Austria was overtaken by the Germans in World War II, Rau had the opportunity he’d longed for to empty the famed Spanish Riding School of its Lipizzaner stallions and begin his Frankensteinian creation of the perfect horse.

The strange dichotomy of the Nazi mentality is never more prevalent than in their love and care for horses, as opposed to the Russian’s slaughter of the animals they overtook. When a former U. S. cavalryman and horse lover, Col. Hank Reed, learns of the imminent attack on a stud farm in Czechoslovakia, where the Arabian and Lippizaner were taken by the Nazis, he mounts an incredible rescue effort, in conjunction with the farm’s veterinarian, and with the blessing of General George Patton. The action is as thrilling a read as any war story.

What is most moving is the common goal of men who were made enemies by their countries to save the horses. American, Polish, German, Austrian—these men and their families were intensely dedicated to their mission, with complete disregard for their own wellbeing. Surrounded as they were by horrific casualties, they never felt for a moment that their mission was anything less than noble:

Against the backdrop of all this wreckage, the saving of the horses was a small thing; and yet as Hank Reed’s men instinctively knew, it was only through individual acts of compassion that the world was able to climb out of the trough it had dug for itself and attempt to find its way into a more peaceful future.     Later, when people asked why he had decided to save the horses, Colonel Reed’s answer was simple: “We were so tired of death and destruction. We wanted to do something beautiful.”

Elizabeth Letts, author of THE EIGHTY DOLLAR CHAMPION, again has written a compelling, page-turning, true tale of heroism, courage, and the intense relationship between man and horse.