This Little Piggy: review of ESTHER THE WONDER PIG 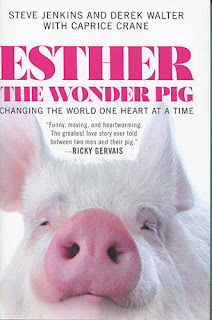 ESTHER THE WONDER PIG:
Changing the World One Heart at a Time

She was supposed to be a "mini pig," a species which does not, in fact, exist. But Steve Jenkins was so taken with the thought of having a house pig, he didn't investigate the allegations any further. When he picked her up from a (former) friend, she was "as big as a sneaker," and as adorable as a baby animal could be. He was told she was six months old (she was actually only six weeks old), and that she'd grow to be about seventy pounds (times ten, in fact).

As it became apparent that Steve and Derek's "little girl" wasn't going to remain so little, and that she was what's termed a "commercial pig," their lives and their home were turned inside out. Esther was brilliant at breaking into anything that might contain something edible. She was reluctant to be house trained, and preferred to cuddle on the bed with her humans, dogs and cats, rather than stay outside. In other words, she became a pet, an animal companion, a non-human cohabitant. And there is nothing whatsoever commercial about her.

The turning point really hit when Steve set up a Facebook page on Esther's behalf, and suddenly the Likes and Shares and Comments grew into the thousands. Fans of Esther popped up everywhere, and each one pledged support for the pig and her suddenly vegan "parents." That support was especially important when the time came, as it was bound to, to move from their 1000-square-foot home to a farm that would allow Esther room to root and become a sanctuary for other rescued farm animals.

ESTHER THE WONDER PIG is written in a casual, funny, light-hearted voice that will produce some audible laughter, and a few cringes (the failed house training is truly cringeworthy). But of course, there is a deeper purpose to the book, and that is that we need to pay attention to the cruelties of factory farming and the importance of considering alternative lifestyles. Commercial or Large White pigs are the most prevalent domestic pig raised specifically for food. They grow large at an accelerated rate and are slaughtered at a young age. On small farms, they are at least given room to root and frolic before meeting their end, but in large commercial farms, their short lives are as miserable and frightening as their deaths.

Esther's story is another call to end our dependence on factory farm meats and dairy products. Going vegan is one way, but there are other ways to combat the cruelty. A first step is to meet Esther and her compatriots and recognize their intelligence, personality, and right to a safe and humane life.


Posted by Books for Animal Lovers at 6:12 AM