A Wild Life: review of DREAMING OF LIONS, by Elizabeth Marshall Thomas 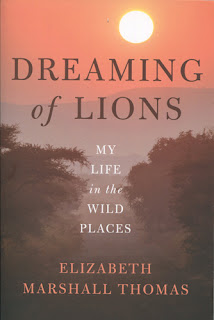 Dreaming of Lions
My Life in the Wild Places
Elizabeth Marshall Thomas
$17.95, paperback; our price $14.36

I first learned of Elizabeth Marshall Thomas in 1987 when I read a review of her novel, REINDEER MOON, and raced out to the local bookstore to buy a copy. I was enthralled, and have continued to be a fan all these thirty years later. Not only is Ms. Thomas an insightful observer of animals (note her titles, THE HIDDEN LIFE OF DEER, THE HIDDEN LIFE OF DOGS, and THE TRIBE OF TIGER—all available at www.booksforanimallovers.com), both domestic and wild, but she is a talented anthropologist as well.  And she ranks as one of the best nature writers we have. All of her work is autobiographical to some extent, except the novels, but DREAMING OF LIONS is the first time she has completely opened her front door and allowed her readers into her private dwelling.

Brought up by a father who was drawn to wilderness exploration, and who taught his children to read the constellations in case they were ever lost in the woods, and a mother whose love of animals was so extensive, she literally wouldn’t hurt a fly, Liz’s inclination to explore the world and learn as much as possible were encouraged . . . up to a point. She was a girl, which meant that ultimately, her goal in life should be to marry and produce children. Overcoming those limitations put on her because of gender may have helped steel her inner drive, because she certainly never let such limits get in her way.

In 1951, when Liz was a freshman in college, the Marshall family went on an expedition to the Kalahari Basin in Africa, a supposedly unexplored, uninhabited section, which in fact, had been continuously inhabited by Bushmen for thirty-five thousand years. Friends and acquaintances thought there must be a specific reason for such a dangerous trip: Were they searching for diamonds? A lost city? Why would a young girl want to leave college to follow her family into such wilderness? The purpose for the journey was adventure, and adventure equaled knowledge. It was an experience that shaped the rest of her life and her work:

“ . . . one way or another, the Kalahari is in all the books I’ve written . . . I always seem to write the same book. Whether I’m writing about dogs, cats, deer, people, or anything else, the lens through which I see them is the Kalahari. With the exception of some jobs I’ve had . . . which required at least a college degree if not an MA, I could have skipped college altogether.”

Later in her life she again lived in Africa, this time with her husband, two small children, and her dogs. Her experiences in Nigeria just before and during the coup inspired a fear in her that eventually drove her into one of the darkest times of her life. But her fascination with the people and animals of the region, as well as the still unfolding history, never left her.

As with any life lived fully, tragedy comes to call, not just once but many times. Ms. Thomas is a woman who never shied from dangerous circumstances, and that vibrant and courageous streak was inherited or instilled in her two children, a son and daughter. Both suffered life-changing incidents, and yet their enormous psychic and physical strength and determination were never diminished, and in fact seemed expanded by their hardships. Her admiration for them is profound, as is her enduring love for her husband, Steve Thomas, to whom she was married for sixty years.

I was fortunate to see Elizabeth Marshall Thomas at a local book signing recently. At eighty-five, she exudes an energy and intense interest in the world around her that is contagious. She is hard at work on a new book, her third novel to follow REINDEER MOON and THE ANIMAL WIFE. I for one will be anxiously awaiting its arrival.
Posted by Books for Animal Lovers at 1:24 PM