Dog Detective: review of SCENTS AND SENSIBILITY, by Spencer Quinn 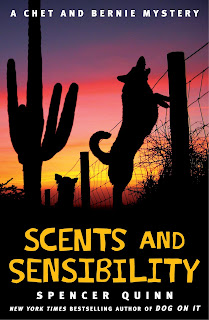 In this latest installment in the Chet and Bernie Mystery series “Chet the Jet” supplies us with more fast-moving intrigue as he himself struggles to understand the humans around him, especially his favorite human of all, Bernie Little, owner of the Little Detective Agency.

Returning home from their last case (see Paw and Order), Bernie and Chet are dismayed to find their safe missing, and Chet's nose confusingly picks up the scent of his best pal Iggy who lives with the Parsons across the street. What could old man Parsons have to do with this apparent theft? Bernie and Chet find out soon enough when an illegally transplanted saguaro leads to murder.

When I introduce those deprived folks who have not yet had the pleasure of reading any of the books in this delightful series, I explain the concept the way Spencer Quinn himself does: Chet the dog serves as narrator of the mysteries, and never once seems any less doglike. He is easily distracted by edibles, often finds that his tail has a mind of its own, and relies on his superior nose to help his pal Bernie do what they do best. Although a K-9 School failure (“I’d somehow flunked the leaping test on my very last day. Was a cat involved?”), Chet is Bernie’s right hand, uh, dog, and loves Bernie with an unwavering devotion.

Chet is also somewhat philosophical in his observance of human foibles and fumbles. For instance in trying to understand the meaning of skin color, he muses:

The truth is there’s not much color variety when it comes to humans, not compared to how we roll in the nation within. Take me, for example: mostly black but with one white ear, which I know on account of how many people mention it in my presence. Ever seen a human colored like me? The point is humans go on and on about skin colors when it isn’t even one of their strengths. And they have so many strengths: cars, tennis balls, bacon, and that’s just without even thinking, which is how my mind works best.

Quinn masterfully moves the story along by use of dialogue, which Chet overhears, and generally misinterprets, and with Chet’s own observations. His senses are keen, but deductive powers are, as he puts it, Bernie’s terrain. He is unable to count past two, and his knowledge of colors, especially red, is, he says, not to be trusted. But what a nose, far superior to Bernie’s, even though he admires his friend’s bountiful feature:

"One thing for sure," Bernie said. "I smell a rat."
All at once Bernie had my full attention. He had never smelled a rat before, not in any back alley, Dumpster, or landfill we’d ever investigated, almost all of them as ratty as you could wish for. Once we’d even worked our way into a sewer system. Rats out the yingyang down there, my friends. Invisible, yes, on account of the darkness, but they’d smelled the place up in a way that couldn’t be missed. But that was the point: Bernie had missed it. That was when I’d first been certain that his nose—really good-sized in human terms—was mostly for decoration. And now he was smelling a rat, when—trust me—there was no rat to smell?”

Humor aside, the action is intense. Bad guys abound and Chet is pushed almost to the brink, as is Bernie, leaving us with a cliffhanger at the end of the book. Now we shall have to wait another year for the next installment. Unlike Chet, this human finds waiting terribly difficult. With no bone to chew or tail to admire, I’m left to wonder and worry about what awaits the Little Detective Agency.
Posted by Books for Animal Lovers at 7:48 AM