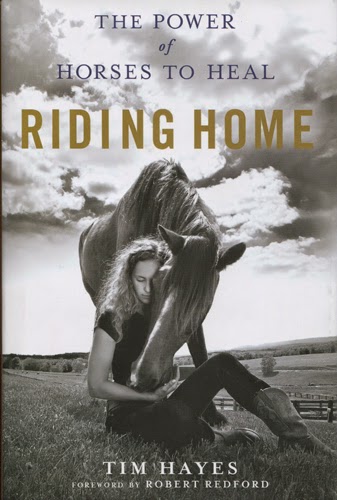 Tim Hayes came late to horsemanship, relatively speaking. Most riders have their first experiences with horses as children, and are able to learn to trust the huge animal they are sitting upon with unquestioning confidence, but without really understanding the nature of the relationship. Hayes was in his late forties when he began working with horses. It seems remarkable that he was able to find that childlike wonder so late in life. But then again, that’s part of what Riding Home is all about: rediscovering that wonder, or, in the case of a dysfunctional childhood, creating a new sense of wonder, health and contentment, all through working with horses.
A child with severe autism, a veteran with PTSD, a troubled teen, a prisoner with a violent past—Hayes relays several actual cases of recovery and psychic resurrection thanks to the powerful horse/human bond, and he explains the mechanisms at work behind this unusual alliance.
The fact that a horse can assess a person’s state of mind and mirror it is not magical or supernatural. It is based on the horse’s own place in nature as a prey animal, always hyper-vigilant in maintaining his own safety and comfort, and adhering to the laws of the herd. And yet, when a child with autism sits upon this sensitive creature and feels safe enough to speak out loud for the first time, the result does seem magical indeed. Horses (and other animals, too) offer unconditional acceptance. They do not judge past actions.  They are not concerned with your appearance, but only with your demeanor in relation to them.
Hayes tells the story of one Iraqi War veteran, Cody, who turned to Hearts and Horses for help when traditional therapies were not successful in treating his PTSD. He was paired with a horse named Dusty. Cody asked his equine counselor why Dusty periodically pinned his ears and seemed distrustful of him when he approached. The counselor asked if he was anxious and he admitted he was, in fact “all of the time.” She suggested then that he was making the horse anxious, and that Cody stand next to Dusty, stroke him, and just breath. Gradually, both Dusty and Cody relaxed, and soon their relationship became a bond built on trust. It took time, but as Cody tells it, the result was amazing:
I’ve been riding and hanging out with Dusty for about a year. I feel a sense of accomplishment—my health is definitely not in the clear, but it’s in my rearview. What’s really incredible is my trust. When I came home, I couldn’t trust anybody or anything. Dusty got some of it back for me. It’s like he brought me home.
Hayes writes well about natural horsemanship, explaining elements of training for the novice as well as the seasoned rider. Experienced horse people will find much to gnaw on here; there are many ways to explain developing “feel” when riding, but it can still be a vague and arbitrary term. Hayes’s explanations are plausible and straightforward, and will have equestrians nodding in agreement, and wannabe riders Googling horse farms!
The book includes an appendix, listing various equine therapy organizations, an index, and extensive bibliography. This is a fine addition to any horse person's library, and to the literature of animal healing.

Posted by Books for Animal Lovers at 9:46 AM