A Dog for the Ages—review of The Great Grisby 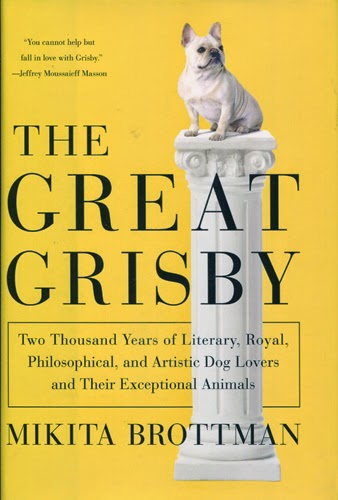 The author of this quirky, funny, scholarly romp of a book came to dog ownership relatively late in her life (forties), and found her usual cynical, depressive nature to be altered by her French bulldog’s zesty love of life. By wondering if she loved this dog too much, she did what scholars do: she dove into researching the dog/human partnership throughout history and literature.
Arranged alphabetically by dog name, this is almost an encyclopedia of dog characters, chockfull of wonderful trivia and little-known tidbits. Each chapter brings us back around to the author’s own wonderful Grisby, skillfully fitting his little chubby body into the grand picture.
In the chapter on Lump, a dachshund owned by photojournalist David Douglas Duncan, we learn that the dog became enamored of Duncan’s friend Pablo Picasso, who, as Duncan noted, tended to “borrow” animals from friends much the same way he “borrowed” women. Lump jumped ship, so to speak, and for six years was a steadfast companion to the artist. But the chapter on Lump gradually morphs into the story of other famous dachshunds, and then into the connection between artists and dogs of all kinds. Here, Brottman leads us into a digression about dogs on university campuses, and thus back to her beloved Grisby. Her decision to live in Baltimore and teach at the Maryland Institute College of Art was based, in part, on the fact that Grisby was allowed to join her in her classroom. “I may not be a painter,” she says, “but like Picasso and Pierre Bonnard, I need a dog to hand at all times—and in my case, only Grisby will do.”
One of the most remarkable chapters concerned Robber, Richard Wagner’s Newfoundland whose loyalty was particularly amazing considering the absolute hell he had to endure as the Wagner “pet.” Due to financial instability, Richard and his wife Minna had to go on the lam, escaping first to Prussia, and then setting sail to London. To get to the coast, they had to travel by carriage, but Robber was too large to fit and spent most of the journey running alongside in blazing heat. Once at sea, Richard, Minna and Robber had to stay concealed belowdecks and all three suffered from horrendous seasickness. By the time they reached Paris, poor Robber had apparently had enough of the discomforts of travel, and fled. His loyalty had definitely reached its limits.
The chapter on Robber then dives into musical portraits of dogs or music inspired by dogs throughout history, and then smoothly transitions to Grisby sitting on the pedals of the author’s piano as she practices, and what this position represents in the hierarchy of dog/human relationships.
There was not one chapter that didn’t leave me smiling, laughing, or gasping in amazement. This book not only serves as a brief history of human culture (with dog), but as a tribute to one particularly inspiring bulldog. “I have to confess,” she writes, “I’m not a ‘dog person’ (whatever that means); I’m a Grisby person…. If Grisby and I meet another bulldog or bull terrier at the park or on the street, we’ll always stop for a moment… I’ll chat with the other dog’s owner, asking about the animal’s weight, age, and disposition. We’ll smile, nod, and pretend to admire, then walk away, both complacent, no doubt, in the knowledge that our own dog is unquestionably superior.”
Posted by Books for Animal Lovers at 6:05 PM