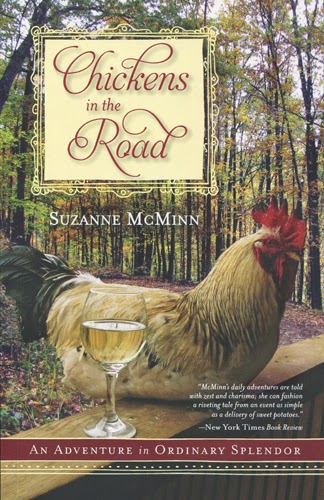 I had worried when I picked up a copy of CHICKENS IN THE ROAD: An Adventure in Ordinary Splendor,  by Suzanne McMinn (2013; Harper One) that I’d be convinced again of the necessity for us to sell our semi-suburban home and buy a farm. The romantic notion of a lady’s farm (as opposed to a gentleman’s) still whirls through my head. I’d have chickens for fresh eggs, a horse or two, and goats. Several goats. All would be pets, not product (except for the eggs), and we’d live in an idyllic world of soft evenings on the porch, listening to the whispers of wildlife….

Yeah, no, that’s not really what it’s like. I guess I knew that, but reading McMinn’s account of her move to an extremely rustic farm in West Virginia, reaffirms my belief in my own inherent laziness. The physical effort that every little mundane situation encompasses made me tired just reading about it. Of course, she started this as a still young woman, but with three children, a recent divorce, and a new relationship that proved unsustainable.

Her farm, on the other hand, grew to be quite sustainable after some difficult choices. And the blog she kept that actually supported her farm, became an inspiration to many to pursue a simpler way of living. But simple does not mean easy. And the care of animals and slaughter of those who were intended for meat or who were simply too aggressive for her to handle shattered my idealistic version of farm life into smithereens. I realized I could not make the hard choices the author makes on a daily basis. Maybe I’m too old, or just too soft.

Not to say, however, that the book isn’t thoroughly enjoyable, because it is. Perhaps it wouldn’t appeal to vegetarians, but to anyone interested in sustainable living, in DIY lifestyles, and in learning what not to do when growing a farm, Chickens in the Road will delight. And the stories of country folk in West Virginia and their humor and fortitude are treasures.
To learn more about this and other animal books, please visit us at www.booksforanimallovers.com.
Posted by Books for Animal Lovers at 5:24 AM