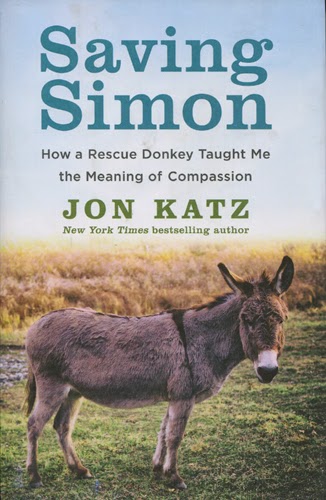 All of us, animals and humans alike, carry some baggage from earlier days, either in the form of trauma and abuse, or just simple regret. Some carry a freight-train amount; others just a fanny pack. What Simon the donkey carried was almost beyond comprehension. He started life with a good family of humans and horses and one other donkey. He grew up as a companion to a young boy who loved him. But the recession hit their farm hard and Simon’s owners were forced to sell off their family of animals.
Where Simon ended up was a living hell, and he sank into the muck of the poverty and neglect until he was barely alive. The farmer who allowed his slow suffering was so deep into his own depression he couldn’t bear to check to see if the donkey was still breathing. He had shut down, becoming almost soulless.
Fortunately, not everyone is willing to turn away from those in need. Simon was rescued, and found a new life with Jon Katz and his menagerie. But his rescue and recovery are just the tip of this book’s message. It is really about compassion—What is it? Who practices it? And who deserves it?
Mr. Katz is a bestselling author and a photographer, whose written and visual portraits of Bedlam Farm are widely known and admired. His blog is read by thousands, and is an example of how different the relationship is now between authors and their readers. He does not shy away from difficult topics, and is honest about his own participation in the “tooth and claw” aspect of the animal world.
There are contradictions in Mr. Katz’s premise and actions, but he also acknowledges his own stumbling journey as he ponders his reactions to animals in need against the kneejerk response of condemnation for animal abusers. Why are we not compassionate for the people who have obviously fallen so low as to treat their animals or children with such utter cruelty? he asks.
The question should be asked. When an animal is abused, the anger against the abuser is strong and righteous. Mr. Katz suggests that perhaps we need to step back and consider who is really in need of compassion. A little bit does go a long way, and could, in fact, prevent the kinds of situations Simon was in. Compassion for a loving, gentle donkey is easy; compassion for the hardened, despairing farmer is not. Both are badly needed. When Simon displayed his natural but less than adorable aggression toward an aged blind pony, the author’s outrage nearly usurped his love for the donkey:
“Ever since I adopted Simon, a rosy glow had surrounded my notions of animals. Rebirth and resurrection are powerful ideas, and I think animals make it possible to experience both time after time. And, of course, I was a hero. Everywhere I went, people thanked me for saving Simon, for taking him in, for giving the story of his rescue such a happy ending. And among animal people, happy endings are precious….
“But one thing more powerful than our love of animals is our love of self….”
He recognizes that Simon’s actions were completely predictable and understandable, and yet neither predicted nor understood. He swallowed his anger and apologized to the donkey: “How quickly my own convictions about mercy and compassion had collapsed in a fury because Simon had behaved like a donkey instead of a human being, instead of me.”
The other animals who benefit from Bedlam Farms also arrive with their own particular baggage. But Simon is the leader, both physically and psychically, at the farm. It is from him that the author ultimately defines compassion, and admits to and takes ownership of his own heavy burdens.
Posted by Books for Animal Lovers at 1:07 PM