A Time for Laughter: Humor Books for Animal Lovers

Most of us are bombarded by daily doses of awful reality spewing from social media, television, podcasts, radio, or simply overheard in bars and coffee shops. No place is safe from it. Our country is in turmoil; our planet continues to suffer from a toxic combo of human intervention and neglect. There are young children in cages, animals being tortured, species dying out every minute of every day . . . It's enough to make you really cranky. So, the solution is to latch onto a book that will let you smile, chuckle, giggle, and even audibly guffaw. Here are a few recommendations (add your own to this list!):

YOU HAD ME AT WOOF: How Dogs Taught Me the Secrets of Happiness, by Julie Klam 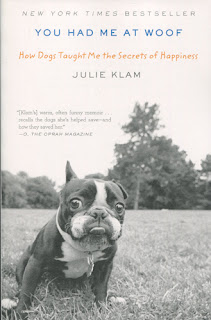 Memoirs about the dogs in one's life usually turn maudlin. Yes, most of us will outlive our dogs, and the endings sometimes overshadow the beginnings. Klam acknowledges that "the end" is part of every life with a dog, but she doesn't dwell on it; instead, she writes with wit and charm and so much self-deprecating humor about finding, keeping, and living with dogs. Not to say she doesn't have some tragedy over the course of dog-life. We all experience it, grieve and get through it. The lessons learned from the lives and the deaths are equally valuable to her.

After a dream in which she acquires a Boston Terrier named Otto, Julie Klam realizes that spending her free time in front of the TV, waiting for the right person to come into her life is just not working out. She searches for the Otto of her dreams and finds him, a rescue, and thus begins a life with dogs.


Having Otto taught me about the give-and-take that is needed to succeed in a relationship. He gave me the courage to try things and the feeling that there was someone waiting for me. If I could've turned Otto into a man, Pinocchio-style, maybe with a tad less gas and eyes that looked straight ahead, I thought at the time, I might actually be able to have a viable relationship.

Each dog she adopts, fosters, or rescues becomes an integral part of her growing family. Some do not work out as well as she'd like, but their importance to her is never doubted. And ultimately, every moment of their lives, even when cut too short, is worth the pain of their loss.


DOG ON IT, Chet and Bernie Detective series, by Spencer Quinn 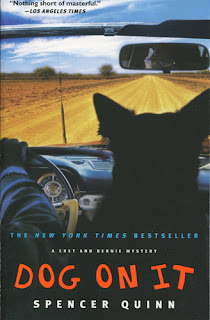 If you haven't read this utterly delightful series, you are missing out! And I hear from a little bird (on FaceBook) that a new installment is in the works. Can't wait. There are eight books in the series right now, and can be read in any order.

Chet the dog (or Chet the Jet, as he refers to himself) is the narrator of these books. Everything is from his perspective, and if something distracts him from the goings-on (an animal scurrying; a piece of interesting-smelling garbage), well, you just have to wait until he gets back on track! These are page-turners that you'll want to reread (I'm starting the whole series over this summer). Need a good escape from reality? Go with Chet.

HOW TO RAISE A JEWISH DOG, The Rabbis of the Boca Raton Theological Seminary as told to Ellis Weiner & Barbara Davilman

A parody of the plethora of dog-training manuals written by monks, whisperers, or whatever, HOW TO RAISE A JEWISH DOG illustrates how you can use guilt, shame, passive aggression, sarcasm, and Conditional Unconditional Love to create an unbreakable bond with your dog.

This is a great gift, and also fun to just pick up and read bits and pieces of when you're in the mood for some silliness!

HANUKCATS, And Other Traditional Jewish Songs for Cats, by Laurie Loughlin

Cats can be funny, too! And these rewrites of traditional songs from the cat's point of view will tickle any kitty's fancy.

TAO OF PUG, by Wilson the Pug (with Nancy Levine)

Sepia photos of Wilson along with his commentary on the Tao, make for a delightful book. As Wilson writes, "When the country falls into chaos . . . Sometimes I am glad I can't read."

For our complete list of gift and humor books for animal lovers, go to: http://booksforanimallovers.com/14-gift-books-seasonal

Posted by Books for Animal Lovers at 6:11 AM