Nobody Knows Better... Review of WHAT IT'S LIKE TO BE A DOG 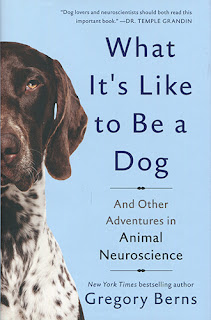 We humans are arrogant creatures. We think because we have written language, etc., that we are the smartest creatures on earth. But, to paraphrase Moonstruck, what we don't know about animals is a lot.

Greg Berns, a psychologist and neuroscientist, has taken upon himself the task of finding out just what is going on inside of our fellow creatures, primarily dogs. His first book, How Dogs Love Us, detailed his experiments with his dog Callie and others by using an MRI to gauge their brain responses to their owners' smells and voices. Since then, he has pursued further investigation of brain activity in dogs, trying to decipher the difference between receiving a treat, for example, to seeing the dog's owner.

The experiments are slow-going and complex, due to the intricacies of the training, but fascinating in their chronicle. As Dr. Berns continued to work with dogs, he also explored the brains of dolphins and sea lions. (Who knew sea lions have a sense of rhythm?) His work opened up more questions about communication between humans and dogs or other animals. He references Chaser, the border collie famous for knowing over one thousand names of objects. Chaser was also able to understand simple syntax and directions, as in retrieving a toy and placing it on top of another toy. But was Chaser unusual? Berns suggests that certain breeds may be more adept at learning language, and he questions whether or not dogs actually know their names or if, instead, they've learned that when certain sounds are made, something (probably good) is about to happen. When I call my dog Katrina, she looks up, expectant. Is she looking up because the sound I made might mean we're going somewhere, or that she's getting a bone? Perhaps the only way to know what she is thinking, hearing, feeling, or expecting, is to study what's happening inside of her brain, and seeing what parts "light up" and when. But is knowing what my dog is thinking important? Can't we just mosey along as we are, ignorant of what thoughts or dreams she is experiencing? After all, I'm the human, and therefore the important one, right?

Stepping into another's shoes (or paws), feeling empathy, is a trait humans have capacity for and yet we seem to use it as little as possible. The current political climate is certainly an indication of that. And as we outgrow our world, the tribalism we're experiencing is bound to expand to the point of an inability to communicate entirely. So understanding what it's like to be a dog, or a horse, or even, yes, a cat, goes a long way to understanding each other. Although dogs may not understand or care what's going on inside of us, they do care about us, and seem to want, for some reason, to be with us. They don't see color or ethnicity, and certainly do not understand what political party we vote for (although that may have long-term effects on their well-being, but that's another story). I read books such as Dr. Berns' because I want to know why: why does the horse I am riding want to do well? Just for the praise? And why does my dog follow me from room to room, just to be near me? Am I really that great?

All of this is a long way of saying that exploring the intricacies of a dog's brain is not an academic pursuit, or knowledge for the sake of knowledge. Understanding animals leads to better understanding of ourselves. Being obtuse, or lacking in any self-reflection, is a dangerous form of ignorance that may yet lead us to catastrophe. Books such as this may serve as a bigger wake-up call than even he intended.