Wild or Tame: review of PAX 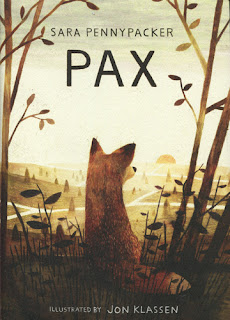 The title of this wonderful book for young (and not so young) readers refers to the fox’s name, but you know immediately this book is not about peace, but war. The war here is not only the outside, inexplicable destruction of all good things, but the personal war the young protagonist is having within himself. There is no good side or bad side in this war, just a fierce and heartbreaking struggle.
Peter is twelve years old, walking the ridge between childhood and adulthood. He lives with his father, an angry and wounded man whose love for his son is overshadowed by the death of Peter’s mother, and by his belief in his duty to be a soldier when his country calls, which it inevitably does. Peter’s comfort comes from his pet fox, whom he’d rescued as a two-week-old kit, several years before. Pax’s mother had been killed, and his siblings had perished. Peter becomes his provider, protector, and brother. They become inseparable, “two but not two.”
But in fact, Peter and Pax are separated. When war intervenes, Peter is sent to live hundreds of miles away with his grandfather, who, like his father, is reticent and angry. Worse, he is forced by his father to deceive Pax and abandon him alongside a deserted road. It’s time the pet fox were wild again, his father commands. Peter, being a child, is powerless to disobey. He is a soldier in a different war. The novel eloquently explores the worry a child feels that he has no control over his own life, or even his own character. The apple never falls far from the tree, as Peter’s grandfather likes to say. Peter wonders if he is doomed to grow up angry and distant like his father and grandfather.
The deception of Pax gnaws at Peter.  Leaving the fox was not right, no matter what the adults around him say. He knows that he is not where he’s supposed to be, so he fills his backpack with basic supplies and leaves his grandfather’s home in the middle of the night. He will find Pax and keep him safe. He will always be where he’s supposed to be.
The chapters alternate between Peter and Pax, taking the reader along on their parallel journeys as each struggles to find the other. Peter is aided in his search by a reclusive, one-legged woman, a former medic in the ever-present war, who lives in the wilderness and avoids all human interaction. By the time Peter stumbles upon her, he has a badly broken foot. Vola is a woodworker, and makes him a set of crutches to use after setting the broken bone. She feeds him, and helps him gain the strength he will need to continue on his journey, but she also opens his mind and teaches him to trust again. Before he departs, Peter offers Vola a gift of his own.
Pax, meanwhile, is gradually welcomed into a small family—a brother and sister fox—who show him how to survive in the wild. He understands his boy’s act was false, but also trusts that Peter would never intentionally hurt him. He never loses faith that they will find each other. When he successfully hunts for the first time in his life, he is filled with wild delight, shedding his tameness for the first time. Likewise, Peter’s time with Vola releases a sort of wildness in his being, allowing him to feel the emotions he has tried hard to repress. Peter tells Vola he will not be angry, not be like his father. She laughs. “We all own a beast called anger. It can serve us: many good things come of anger at bad things; many unjust things are made just. But first we all have to figure out how to civilize it.”
This is a book about war and its devastation on the natural world as well as the human. It’s about trust, and learning to trust oneself as well as others. And it’s about the intense, unbreakable loyalty a child shares with an animal, whether wild or domestic (or both). Peter asks Vola if her raccoon is wild or tame and she “waves the words off as if they were gnats.” She simply leaves the porch door open and lets the animal come and go. And she asks Peter as he settles into the hammock on the porch his first night: “You staying out here on the porch. What do you suppose that makes you? Wild or tame?”
Posted by Books for Animal Lovers at 2:05 PM