The Front Lines of Animal Rescue: SAVING BABY and THE RESCUE AT DEAD DOG BEACH

Half way through her memoir SAVING BABY (co-written with Lawrence Lindner), Jo Anne Normile hits her tipping point when she recognizes the extent of the slaughter pipeline at the racetrack where her beloved horse Baby competed.  Her anger and helplessness become nearly unbearable. It is that tipping point which leads her to work harder on behalf of the Thoroughbreds, and culminates in the creation of two huge rescue organizations. She is not tireless, but she does not give up. Her health and family are compromised by her devotion, but her determination is steadfast.
Being a witness to abuse and feeling helpless to stop it is torture. Jo Anne Normile does not actually witness any crime, since it is not a crime to send a horse to slaughter, even if the horse is only two-years old and basically sound. If the trainer can’t win with the horse, off he goes. Nor are some of the other myriad abuses she sees considered criminal. It’s the way the unregulated racing industry works: the horses are simply commodities, not pets, and are often not even considered to be living, breathing, loving creatures.
Baby, whose registered name was Reel Surprise, is born at the Normile’s barn as a favor to the owner who was recovering from a heart attack. In return, once the mare, Precocious Pat, was ready, Normile could breed her to Secretariat’s son, and keep that foal, fulfilling her bucket list-type wish to have a grandchild of Secretariat on her farm. But Pat’s owner’s health does not improve, and he asks that Baby stay with the Normile family, with one condition: they must race him.
Thus began Jo Anne’s entry into the strange, exciting, and ultimately disheartening world of Thoroughbred horse racing. The incidents of mistreatment she witnesses are hard enough to take, but she believes she must keep her mind on her own horse and not get in the middle of racetrack politics and questionable practices.
Fortunately for the race horses, that reticence ends, but only as a result of tragedy. Jo Anne is compelled to fight to save as many horses as possible in Baby’s name.
SAVING BABY is a much needed eye-opener about the realities of Thoroughbred racing and about being complicit in what can only be described as barbaric mistreatment of animals. And it will perhaps remind us all that standing by and minding our own business is not an option. Rescue work takes a huge toll on Normile’s health, family life, and finances. Still, she perseveres. 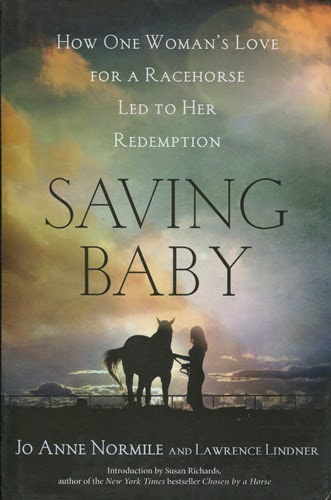 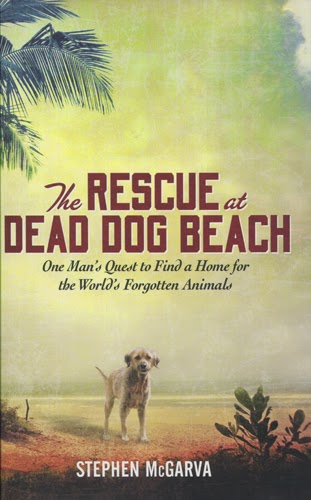 In THE RESCUE AT DEAD DOG BEACH, Stephan McGarva reaches his tipping point as he witnesses an act of such barbarity he can no longer contain the anger that has been periodically welling up within him.
His story begins when his wife receives a job offer in Puerto Rico. The couple had grown a bit weary of small town Rhode Island life, and jumped at this new adventure. McGarva, an extreme sports athlete and artist, had been feeling lonely since his dog Achate had died, and the small Rhode Island town just didn’t offer the kind of energy he was craving.
But his first outing in Puerto Rico, at Playa Lucia, to go kite surfing takes a horrible turn. Instead of finding a secluded, pristine beach, he is met with the sight of dogs (and one horse) who had been brutalized and left dead or near death along the sands and the perimeter of the jungle. He abandons his surfing plans that day, and instead begins what will become a soul-crushing routine of daily caring for the barely living dogs and burying the dead.  Just as Jo Anne Normile fought for the horses as a tribute to Baby, Steve McGarva feels he owes it to Achate’s legend to help the unfortunate animals on the beach. His work gives him purpose, but it also overtakes his life. His marriage suffers, as does his health. But he forges ahead, unwilling to give up.
Within weeks, his pack grows to several dozen, and he finds a few compatriots who also try to ease the suffering of the satos or wild dogs. The dogs are not wild, but abandoned, abused, neglected. Why is a question no one seems to be able to answer, although in some cases, the poor economy where people are simply unable to afford the care of a pet, is to blame. Most of the dogs wear collars, often embedded into their flesh, and all long for affection as much as food and water.
As a consequence of caring for the pack, Stephen McGarva finds himself to be the target of violence. There are plenty of people, he’s told, who think nothing of murdering a stray dog or a stray American, and he is repeatedly cautioned to watch his back. The threats grow in intensity. “I never would have imagined,” he writes, “that animal rescue would become the most extreme sport of my life.” Sporting a machete for protection, he enters a battle that seems unwinnable.
This is not an easy story to read; the horrors he recounts will make animal lovers bristle with anger. But it needs to be told and to be read. What McGarva has accomplished is nothing short of miraculous. His courage and his determination are to be emulated. The emotional toll the experience took on him almost did him in, as with Normile, but like her, he found the inner strength to keep going. And for the satos of Playa Lucia and elsewhere in Puerto Rico, it’s a good thing he did.