Learning to Live: review of THE ART OF RACING IN THE RAIN 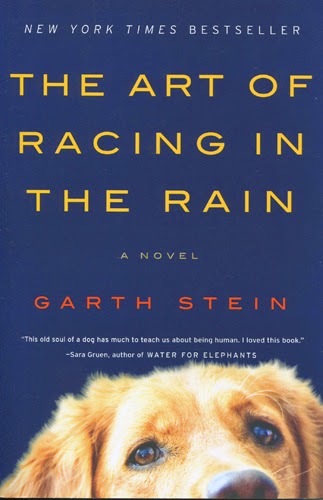 “Gestures are all I have; sometimes they must be grand in nature.” Having too large a tongue to speak as a human, and lacking thumbs, Enzo feels the unique pain of being aware of his shortcomings, as well as his potential.

Because, of course, Enzo is a dog, but he is a dog on his last round of life as a canine, and believes—or rather, knows for a fact—that his next life will be as a human. His observance of life around him, therefore, is particularly intense. He wants badly to understand human nature. As he studies the broad spectrum of interactions, he is in the position of an overseer: He recognizes evil, or at least, inequity, before his person, Denny, does. He smells the disease and the doom coming, and he does his best, through gestures, to warn or advise those he loves. When his gestures are misunderstood and misinterpreted, he suffers intense frustration, but continues to forge on.
It’s this premise of journeying from the animal world to the human that makes this novel so wonderful. As Enzo learns the intricacies of car racing from Denny, he longs to understand the art of living a good life, or being a good person. At times his animal nature intervenes, and he struggles to control it. What he doesn’t always recognize is that his nature is arguably more humane than human nature.

As he watches the mistreatment of his human family, he struggles to understand why people abuse one another. And he questions Denny’s reluctance to fight back. Enzo has no problem growling at the perpetrators of their troubles. Why won’t Denny growl as well? The reasons are complex, but he does gradually understand that perhaps people are not just good and bad, just as dogs are neither one nor the other. And that life is very much in our hands to screw up or enhance:

In racing, they say that your car goes where your eyes go. The driver who cannot tear his eyes away from the wall as he spins out of control will meet that wall; the driver who looks down the track as he feels his tires break free will regain control of his vehicle.
Your car goes where your eyes go. Simply another way of saying that which you manifest is before you.
I know it’s true; racing doesn’t lie.

There’s no spoiler in saying that Enzo is nearing the end of his life; he speaks of it in the first chapter. His anticipation of this transition and his certainty of the next stage are contagious, giving his reader more hope than sorrow. I found this to be an incredibly optimistic book, while at the same time, a solid warning to all of us to beware of spinning out of control.
Posted by Books for Animal Lovers at 1:17 PM